The newly unveiled Mesbah-1 ("Lantern-1") appears to be a mobile, short range AAA system, which includes defense in the anti-cruise missile/PGM role.
click photos to enlarge 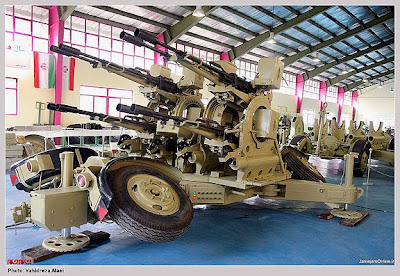 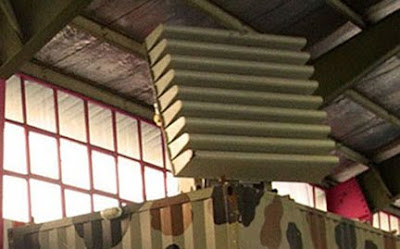 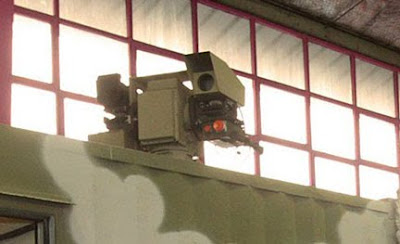 This Mesbah (Lantern) Radar controlled (looks like a phase array radar) AAA system with optical tracking and linked with a SAM system is based on the well tried system ZSU 4 quads Zu-23-2 guns (8 individual guns in total). This 23mm auto feed AAA would operate like a US Phalanx or Swiss Oerlikon (Iran has experience with both) at knocking out low level drones, planes and cruise missiles. Iran also deployed the mobile version of Misagh 2 SAM system that operates in conjunction with these rapid fire saturation AAA systems. The rate of fire from the 8 guns would exceed oround 3000-4000 rounds per minute ensuring target destruction.

"The defense system has been designed on the basis of increasing the volume of fire and controlling it by a reliable system," Vahidi added.

He said high destruction power, decreased number of the needed crew in comparison with similar defense artilleries, rapid reaction against threats, high volume of fire with 4,000 shots per minute and increased targeting precision are among the major features of the newly produced defense system.

Vahidi had announced on Sunday that his ministry produced a powerful anti-missile system to destroy incoming cruise missiles.

"Experts at the defense ministry have succeeded in building a short-range air-defense artillery system that is able to fire 4,000 shots per minute," Vahidi said in an interview with FNA.

"The system has been produced to confront military threats flying at low altitudes such as cruise missiles," the minister went on saying.

Vahidi stressed that the system will officially start operation in the near future.

He also pointed out that the ministry is working on different short-range, mid-range and long-range air-defense systems.

Miqani also described continued optimization of the existing systems, good interaction with universities and industries, building dozens of home-made flaks capable of competing with the world's modern systems and building anti-aircraft missiles and military and civil defenses as among the most important activities of the base.

Tehran launched an arms development program during the 1980-88 Iraqi imposed war on Iran, to compensate for a US weapons embargo. Since 1992, Iran has produced its own tanks, armored personnel carriers, missiles, fighter jets and other high-tech weapons.

The development of the "Mesbah 1" (Lantern), a new air defence system for countering aircraft, cruise missiles, choppers and other low-altitude threats, was announced by Iran's defence minister Brig. Gen. Ahmad Vahidi Wednesday, May 5. It will go into operation in the near future. Western military sources say that Iran has indeed designed a weapon of this type and quality, it has come up with a powerful answer to US and Israeli cruise missiles, which pose the biggest threat to Iran's nuclear facilities in a military strike.

General Vahidi stated that the Mesbah can fire 4,000 shots a minute, is very precise and can be operated by a smaller crew than similar artillery systems. He claimed it was also effective in tracing and shooting down unmanned aerial vehicles - drones.

The Iranian Air force is also reported to have received 10 new "Toofan" (Storm) attack helicopters based on the Bell AH-1K Sea Cobra design. After studying photographs, Western military sources reported the Iranian version has been heavily upgraded compared with the original. It has a narrower airframe for greater flexibility and is armed with M197 3-barrelled 20-mm "Gatling-type" cannon in the A/A49E turret. Its wing-stub stations carry a pair of 19-tube 70-mm rocket launchers. The rear section has a Vulcan-type 20-mm automatic cannon, and two clusters of 38 anti-tank 70-mm missiles.

Bullet and flak resistant glass protects the pilot's cockpit and weapons officer station, internal avionics have been revamped with the addition of a GPS and receiver in the nose, and a warning radar attached to the rear, with four antennae providing 360 degrees coverage and all electronics systems integrated.

US and NATO intelligence sources note that the Iranian Air Force's Badr Base for light aircraft and helicopters at Esfahan, central Iran, accommodates 1,000 aerial military vehicles of different types, mostly attack helicopters, drones and transports and is the biggest air base of its kind in the Middle East and Southwest Asia.

Is there any official data regarding which sites will this system be deployed to ? and in how many numbers ? what's the production rate ? i know there are figures on these aspects released by independant sources on other combat systems, byt i couldn't possibly find any on this one, probably because it has only recently started to be deployed. Any overall data on these ?