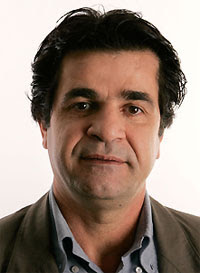 Following two months of custody Jafar Panahi has been released from prison in Iran.

The acclaimed Iranian film-maker had been arrested for voicing his support for the opposition.

It has been reported that he was bailed out of prison for $200,000 which has also followed a week long hunger protest.
Posted by Paul Iddon at 12:37 PM

Specifically, Panahi's criminal convictions were based on seditious activities, including involvement in international groups identified by VEVAK as subversive or sponsored threats to the security of the state.

very often , its just a message.

so bloody transparent i could practicaly throw up on BBC

had never heard of him either

BBC is a news outlet we must never trust.Everytime they report on Iran we always have to switch to the mode of not believing because its the British that are talking and they only talk and tell what suits their benefits

Instead of criticizing the BBC for reporting on Panahi's release, you need to criticize the reactionary and dictatorial tendencies inside the Islamic Republic that leads to the arrest of one Iran's renowned filmmakers in the first place. If some of you had not heard of him prior to his arrest, I suggest that you take time to follow the modern Iranian film industry and its internationally acclaimed actors and film makers, they bring honor and pride to the Iranian nation.

"seditious activities"? "subversion"? "threatening state security"!? My oh my. You wouldn't have been employed in a pervious life by the Stasi now, would you?

Panahi is an honorable man, good he ios free again
I agree with the anon with the BBC
The BBC is anti Iranian and evil, must be avoided in order to not get contaminated with fear and lies.

Come on Nader,
You can not be serious about the BBC.

Iranians are multi-tasking.. we ought to be able to fight US policies and dislike the BBC at the same time. I know deep in your heart you dislike the Brits too for stealing our national heritage and placing them in their museums and etc etc.

I want my artifacts back and the firts step for that is to make the world realize who and what the British are... namely Thieves and Pirates and the BBC is their Propaganda machine.

I thought this post was about Panahi, not BBC. Am I missing something?