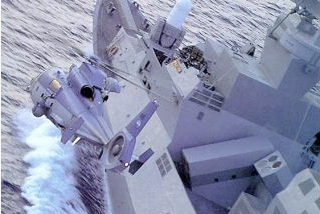 "Supporting the people of Palestine is equal to supporting peace and freedom of every nation."

"[Israel is] fabricated not only with the aim of gaining control over the Middle East but also over the entire world."
- Ahmadinejad

Iranian President Mahmoud Ahmadinejad has seriously criticized Israel for its illegal attack on the Free Gaza Movement flotilla that was bringing basic food and medical supplies to the people of Gaza which left Cyprus for Gaza yesterday.

The Israeli Army raid on the flotilla took place 90 miles off the Gaza coast was in international waters and resulted in the deaths of 20 and wounding of 50 civilians mostly Turkish nationals.

The flotilla was made up of citizens and boats from Algeria, Australia, Belgium, Canada, Germany, Greece, Republic of Ireland, Kuwait, Malaysia, Norway, The Netherlands, Palestine, Poland, Serbia, Spain, Sweden, the United Kingdom and the United States. 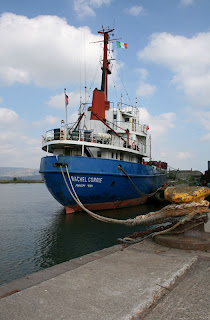 The flotilla has been seized by the Israeli Navy and those aboard have been detained.
Posted by Paul Iddon at 1:29 PM

This latest Zionist crime against humanity is the lowest of low so far. Murdering women and children on a peace mission in international waters is an act of war and a war crime. This is the fisrt time so many Turks have been massacred in cold blood by the Zionist criminals and hopefully Turkey will take a stronger stand than mere "condemnation" of the Zionist entity. The first step should be to break off all ties with this criminal rogue Zionist regime and then take steps to put military pressure on these savages. In a protracted war of resistance and attrition the 5 million imported Zionist criminals simply can not last. In 1973 just to avoid such a scenario, Kissinger had to buy the puppet Sadat to opt out of the front-line resistance coalition of Egypt and Syria which had shaken the Zionists to the core in the October 1973 War. General Saad'eddin Shazli's (Egyptian Chief of Staff fired by Sadat) book CROSSING THE SUEZ gives a good insight into US intrigues with the Egyptian military.

By his sell-out, Sadat got a demilitarized Sinai back while Syria lost the Golan Heights and parts of Mount Herman region on the Lebanese frontie.

Turkey can be a game changer in the Middle-East strategic equation. It needs to militarily ally itself with Iran and Syria. Turkish population is already appalled by Zionist atrocities. This is also growing evidence that Zionists are supporting and arming terrorist groups like PJAK/PKK, Jundollah, MKO etc. This is part of their regional destabilization agenda. This latest atrocity will backfire on the arrogant Zionist regime that faces demographic collapse anyway. The racist Apartheid South Africans also arrogantly believed they were invincible until the ANC burnt the ground under their feet. Zionism faces a similar future.

I think Iran today is less isolated than yesterday.do you don´t think that???

nation forces to force egypt leader to open rafale boarder crossing, turky and iran will reinforce sea line by indonazian plus latin amirica such as bresil and some other country will joy them in that case war on line to final case will reach.

Greta Berlin, an American founder of the Free Gaza Movement and one of the organizers of the flotilla who was on another ship, said the commandos hit the deck firing indiscriminately at unarmed civilians and wantonly murdering people who had raised the white flags.

"We never thought Israel would be stupid enough to kill 20 people and wound at least 60," Berlin told Israel Radio. Most of dead are Turkish citizens and the actual number of fatalities can not be confirmed due to total Israeli news blackout and censorship.

"We are all civilians. Every one of us is a civilian who is trying to break Israel's blockade of one and a half million Palestinians," she said.

Israel and its lobby effort in the US have made great efforts at presenting Iran as the leading threat to peace in the region. But yesterday, the NPT Conference declares that Israel should join the NPT and a nuclear weapon free zone be established in the ME. What does Israel do? It thumbs its nose at the 189 countries that signed up. Now that's not just the US and a constellation of allies that's generally referred to as "the international community", when anti-Iran actions are taken at the UN. That's a genuine international community!

And right after that, the Israelis storm a flotilla of peace activists, inflicting dozens of casualties.

It appears the question of credibility has been settled for a time.

Israel's leaders behave much like the apartheid Afrikaners during the 1970s and 80s. Perhaps President Ahmadinejad is right, maybe the Zionist regime really is going to "vanish from the pages of time". Not today, not tomorrow, not the next day- but when you have a regime behaving so recklessly on the international scene, it really makes you wonder.

The policies pursued by the Israeli government and its actions, like today's tragedy, is pushing Israel to the brink of global isolation. With such government in power, Israel does not need any enemies. They are in self-destruction mode.

I would agree with you on this one Nader. The sheer arrogance of the Zionist regime is beyond belief. I remember visiting South Africa in the late 80's and found similar hubris amongst the Afrikaner's who thought that they were invincible and "God's people", little did they know. So-called Israel is far more vulnerable since it has a checkered "history" of barely 60 years and lacks the strategic mass to face the rising demographic tide, even the puppet Arabs have not accepted it. 5 million imported savages flaunting every know human convention do not inspire too much long term survival instinct. Alienating Turkey is perhaps their greatest strategic disaster, along with the relentless propaganda assault on Iran. Even the neutral non-Arab folks in the region and beyond are now getting sick of the Zionists.

I wish I could say

without being called an anti-semite criminal, it is however begining to become a positive adjective, like being called you "bloody human rights activist"