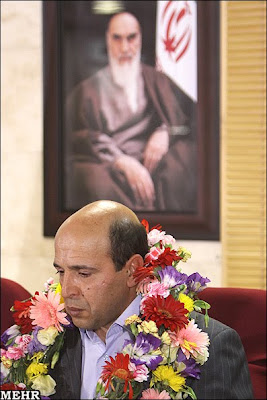 Ali Vakili Raad Arriving at Tehran's Imam Khomeini Airport
In an apparent quid pro quo, France released the killer of former Iranian premier Shahpour Bakhtiar who was an opponent of the Islamic Republic. On Sunday, Tehran released the young French academic Clotile Reiss. She had been charged with espionage. Bakhtiar’s killer, Ali Vakili Raad, was released from a life sentence and sent to Tehran today. Bakhtiar was shah’s last prime minister, his government fell after Ayatollah Khomeini returned from exile and named his own revolutionary government.
Photo: Mehr News Agency (Added to the post on 18 May)
Posted by Nader Uskowi at 1:22 PM

I always wondered, how come he was convicted. I remember well , it seemed in those days an act of desperation and it seemed to me he was the patsy

The actual assassins had left the building along with Elvis a few hours after the act... and he was getting dressed to go out for the night in Switzerland...he could well have been an agent ... but the assassin?.. simply didn't fit

oh well, its all over now.

When France convics someone, that does not mean the someone is guilty.

Remember the Dreyfuss affair ? thats an example and I know for sure it still the same

Shahpur Bakhtiar had served in many Foreign countries armies and militias.. like in Spain and France. Typical of the Shah to make him PM hoping to ease up foreign powers..

Don't have much credible info on him (bakhtiar) to dislike or like him, but judging from history he should have sided with the flow of revolution like the rest of his NF party (Bazargan and co.)

His murderes could also have been die hard Royalists who wanted revenge, I mean he was a small fish to the system in Iran, so why kill him.. but I dunno may be one day the files will appear and the real murderes will be revealed and more importatnt the why.

The monarchists killed Bakhtiar. time will show,
he wanted to tell all on the pahlavi gang and the massive corruption and decadence within it to avoid being associated with them.