Ahmadinejad's speech at the NPT Conference held at the United Nations 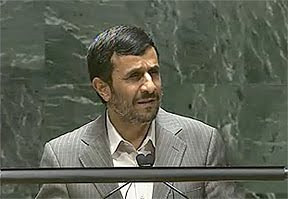 Here are links to the complete statement and video of President Ahmadinejad's speech at he 2010 Review Conference to the Treaty on the Non-Proliferation of Nuclear weapons (NPT).

- "The possession of nuclear bombs is not a source of pride; it is rather disgusting and shameful. And even more shameful is the threat to use or to use such weapons, which is not even comparable to any crime committed throughout the history."

- "Wars, aggressions and above all the shadow of threat and stockpiling of nuclear armaments, and worse than all, the policies applied by few expansionist States, have obscured the prospect of international security for every one. Nowadays, the communities' mindset is largely affected by a sense of intimidation and insecurity. Nuclear disarmament and non-proliferation have not come true, and the International Atomic Energy Agency (IAEA) has not been successful in discharging its mandate. During the past four decades, some, including the Zionist regime, have been equipped with nuclear arms."

- "There are reportedly more than 20,000 nuclear warheads worldwide half of which belongs to the United States. The other competing party also continues the development of nuclear weapon under the pretext of deterrence. Both of them constitute violation of obligations under the NPT."

- "Regrettably, the government of the United States has not only used nuclear weapons, but also continues to threaten to use such weapons against other countries, including Iran."

- "Enjoying especial privileges in the highest global security decision-making bodies and in the IAEA, certain nuclear weapon States widely exploit these platforms against the non-nuclear weapon States, contrary to the spirit of the NPT. This unjust practice, repeated over and over, has turned into a pattern."

- "So far, none of the non-nuclear weapon States has ever been able to exercise their inalienable and legal rights for peaceful use of nuclear energy without facing pressures and threats. While despite clear provisions of article VI of the Treaty and the Statute of the IAEA, no single report has been issued by the IAEA inspectors on the nuclear weapons facilities of the United States and its allies, nor is there any plan for their disarmament, resolutions have been adopted against non-nuclear weapon
States under the pressure of the same States and under false pretext and with the clear intention of denying them their recognized legal rights."

- "While the Zionist regime which has stockpiled hundreds of nuclear warheads, has waged many wars in the region and continues to threaten the people and nations of the region with terror and invasion, enjoys the unconditional support of the United States government and its allies and receives, as well, the necessary assistance to develop its nuclear weapon program. The same States impose various kinds of pressures on the members of the IAEA on the false pretext of probable diversions in their peaceful nuclear activities without providing even a single credible proof to substantiate their allegation."

- "One of the gravest injustices committed by the nuclear weapon States is equating nuclear arms with nuclear energy. As a matter of fact, they want to monopolize both the nuclear weapons and the peaceful nuclear energy, and by doing so to impose their will on the international community. The aforementioned issues are all against the spirit of the NPT and in flagrant violation of its provisions."
Posted by Mark Pyruz at 5:55 PM

Good factual hard hitting vintage Ahmaedinejad. It is really reassuring to see the Europeans even appluading Iran's truthful stance. Only a collection of three odd stooges and charity case Morrocco could not fathom the truth about the Zionist entity's nuclear blackmail and 200 illegal weapons hoarded on stolen Palestine. Way to go Mahmoud Ahmadinejad.

well done in his speach as ever, unfurtunatly the blogger did not respond total his speach regard of 11 point his idea what iaea in the future should or would done the job but the reality of his present to give many country to be courage to implament new law and order for future of intire world he did give the energy the un require to start working for free world of weapon. the reality he is one of greatest mind for iran and the whole world.

not bad.. not bad at all

I wonder why Iran doesn't simply agree to the same nuclear arms limits and inspections as Israel.

truth hurts for US/UK/France. that is why they walked out