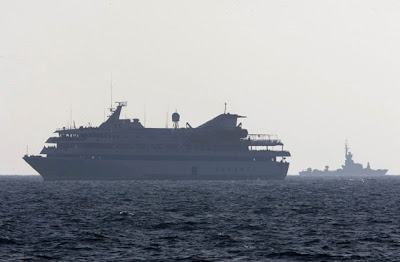 The Mavi marmara, the lead boat of the aid flotilla headed to the Gaza Strip which was stormed by Israeli naval commandos on Monday. Nine passengers were killed in a botched raid the provoked international outrage. 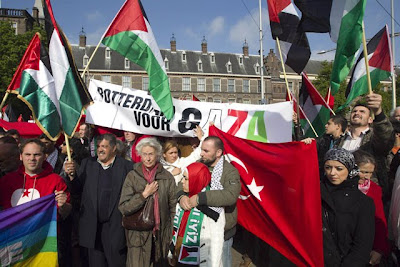 Protesters in The Hague, the Netherlands 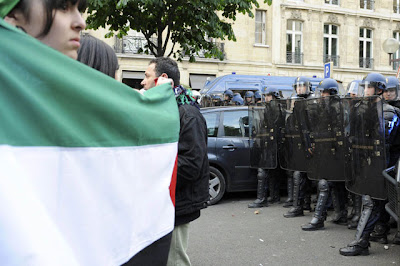 Protesters at Champs Elysees in Paris 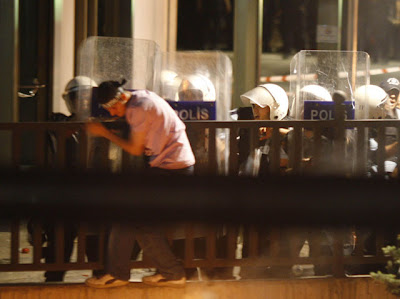 A protester in front of Israeli consulate in Instanbul 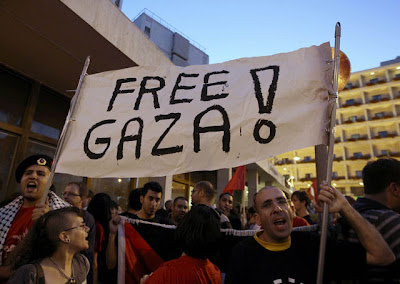 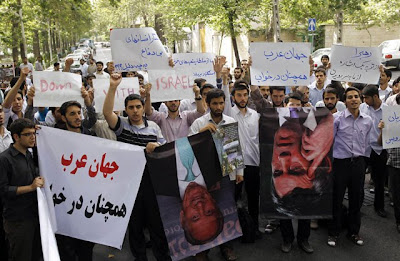 Email ThisBlogThis!Share to TwitterShare to FacebookShare to Pinterest
Labels: Attack on flotilla, Israel

What If Iran Had Carried
Out The Gaza Carnage?
By Kourosh Ziabari
5-31-10

It's not unjustifiable to consider Israel as the absolute incarnation of fraudulence, relentlessness and brutality. Since its establishment, the Zionist regime has carried out actions which contravene the international regulations and cancel out the human rights in a way or another. Only a brief look into the account of Israel's bloody interaction with the Palestinian people over the past years shows us that this fabricated regime does not deserve "the right of existence", as the U.S. and European officials put it periodically.

The Monday assault of the Israel Defense Forces into the flotilla of humanitarian aids which was heading to the besieged Gaza Strip from Turkey left at least 10 dead and several other wounded. Never mind that Israel's criminal action violated the 4th Geneva 1949 Convention. Just imagine for a single moment that Iran had carried out the carnage instead of Israel. Simply replace the two names and then read the news as reported by CNN: "The Free Gaza Movement, one of the organizers of the aid, said that Israeli commandos dropped from a helicopter onto the deck of one of the ships early Monday and immediately opened fire on unarmed civilians."

Since September 2000, Israel killed more than 6,300 Palestinians, most of whom were children and defenseless civilians. Israel has also demolished more than 25,000 Palestinian homes since 1967. It possess up to 200 nuclear warheads in violation of the United Nations Security Council resolution 487. Interestingly, it receives something around $7 million of military aid from the U.S. per day. 7,383 Palestinians are being kept in the prisons of Israel. The racist regime of Israel has built 223 settlements on the Palestinians' confiscated lands. Over the six-year period between September 2000 and February 2006, 36589 Palestinians were injured by the Israeli forces of whom 3530 Palestinians were permanently disabled or maimed. Shockingly, this six-year period was witness to the confiscation of 249680 km2 of Palestinian lands. Israeli forces even refused to overlook the Palestinian trees as they uprooted 1,187,762 Palestinian trees from 2000 to 2006. This shows the nature of the brutal regime of Israel which is even at odds with the natural resources and trees, let alone the human beings.


Again, I'm thinking of the same question. What would happen if Iran, my country, had carried out such a vicious action? The country which has never attacked nor occupied any lands over the past 100 years; the country which has never killed any foreign civilian under fallacious pretexts; would it have been treated the same way as Israel?
http://www.rense.com/general91/outc.htm

well to response to your question,i must say it dependes of if you have the nukes or not...

If Iran has the nukes and would make that action in international waters,the msot probably is the west will be united and will press Iran with more sanctions.

If Iran has not the nukes,the most probably is iran will have a war with the NATO coutries and Israel.


I think ,on the other hand,the response of the UN is a joke.UN has not credibility,is clear they are a tool.

its a question of time till an IAEA report or some other unspeakable evil that Iran has done shall take over the news.
always the same kinda style. did you guys notice the BBC called the loss "deaths" originally and was refusing to name it "Killed" until they had no choice !

i dont think turkey is just let go by doing nothing about it this is big chance to turkey stand strong to continue smash israel image as true terrorist country in the world and founder of terrores new aid should be countinued as soon as possible this time with military navy and if require by airforce back up this is just the beggining of israel long long pain month or year to come as i know turkey country do not make the so easy for israel and israel will be regrat for century may come what was that stupped move did i did.

Besides the Zionist global diplomatic suicide with this bothched murderous piracy at high seas, it is also offers a glimpse into the deteriorating "military deterrent" of the once vaunted Zionist IDF. A sobering military analysis of the the HD news footage, media eyewitness reports and even the highly suspect grainy black and white "operationalfootage" released by the Zionists sheds some light on the operational, tactical and C3I failures. The ineptitude of the US supplied Zionist military and intelligence (MOSSAD)has been glaring since the 2006 war against Hezbollah, bothched assassination of Hamas operative Mahmoud al Mabhouh in Dubai using fake passports and now this military and PR disaster of piracy and murder aganist unarmed peace activists in international waters.

Watching all the released video footage in High Definition reveals a very pathetic picture of the Zionist murderers. The complete tactical failure of the "elite" Zionist commondos is very telling, the clumsy repelling down ropes is more akin to scared and hesitant boy scouts than a professional military unit. The Zionist commondos were armed with 9mm UZI smg's and sidearms, had kevlar vests and helmets against largely middle-aged and elderly completely unarmed Peace Activists. Despite such overwhelming firepower against civilians, one of the scrawny ill-trained murderous commando is clearly picked up and shoved overboard by an activist. The diminutive physical stature of Zionist soliders is also quite revealing. This also begs the question of their performance against a well trained, properly armed opponent and well motivated military like Iran or Turkey or even Hezbollah. The IDF has been only good at murdering defenceless women and children in Palestine, Lebanon and Gaza and created a myth based on brutality and savagery against unarmed civilians. I would love to see how these "elite" Zionist units perform against a matching size regular military like Iran's which is composed of well fed, well armed and motivated men with a 3000year old illustrious martial history or the legendary Ottoman Turks who defeated and over-ran the best of Europe. The more the Zionists murder civilians, the more their Achilles Heal is revealed. I am sure the military planners in Tehran and Bekaa have also been examining every detail of Zionist failures and military cowardice. The next war against the highly motivated, educated and well armed Hezbollah may prove to be an even bigger diaster for the enfeebled Zionist child killers.

Flotilla knew there was a blockade. They insisted on breaching it. IDF enforces blockade. Activists attack IDF troops as they board the ship. IDF troops defend themselves. So what?

If this is a reason to protest, then people have too much free time.

Schmedlap why are you persisting in ignoring the fact that the Israeli Navy attacked the flotilla in international waters?

Not only attacking a civilian ship in international waters PIRACY, but murdering unarmed civilians is a war crime by any standard. The Jews have sunk to a new low.

if the world had done and thought as you do, then Nazis would still be around and Jews would not.

i have question whose turn is to distroy israel once for all? the history of israel is no prommising just full of anger in the world rommand did it turkey did it egyptian did it whom would be next to finnished israel ?