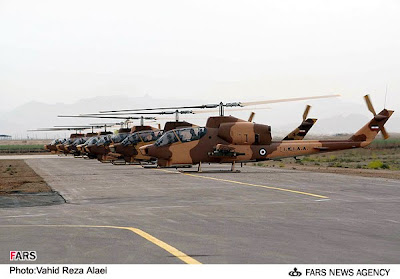 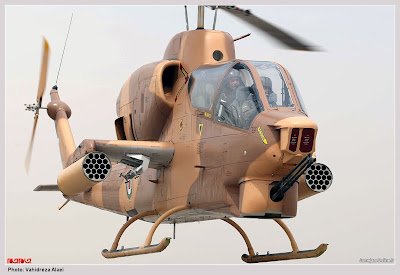 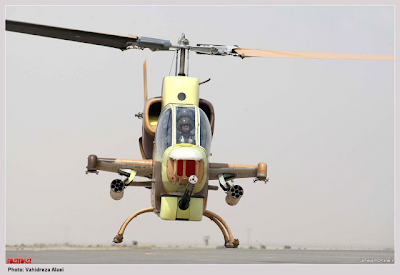 Toofan with unpainted parts, with M197 wearing a gun shroud, and a pair of 7-Tube 70 mm (2.75") rocket launchers mounted on the wingstubs. 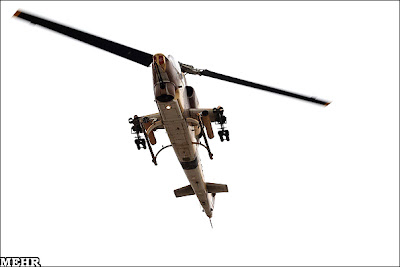 Toofan armed with a pair of 7-Tube rocket launchers and TOW missile carriers. 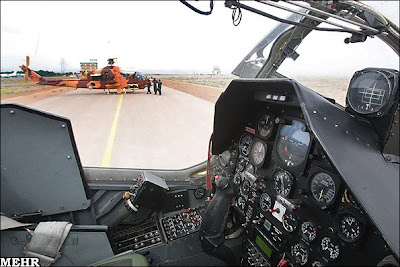 I just noticed a few good innovations on the Tufan. Firstly, the airframe is narrower, armor plated, a targeting camera in the rotor assembly and bullet proof glass with narrower HESA patent canopy, similar to the IRGC black birds. Crew protection against ground fire has been enhanced. There are four ATGM (Toophan TOW) launch racks and twin 50mm rocket pods and a 20mm vulcan rotary cannon in nose with auto targeting. Big improvement over the old Cobra.
All the Avionics and Sensors are new and Iranian made.
The Tufan really shines when compared to its predecessor the HESA P4 Cobra 2091. Both cockpits were completely redone into a glass cockpit. The gunners panel has been replaced with a full-sized LCD MFD with soft-touch buttons as well as with several older style gauges to the right. The IRGC HESA Cobra demonstrated earlier only displayed navigational information as well as basic engine readouts such as temperature and torque. Also, due to the absence of the traditional TOW (Toophan ATGN) targeting system it can be safely assumed that this is integrated into the MFD. The pilot's cockpit and WO (weapons officer)station, has been revamped with the same style MFD. Internal avionics have been revamped including the addition of a GPS and receiver in the nose. A rear warning radar has also been attached with four antennae providing 360 degrees coverage. These integrated electronics systems, according to a newspaper report about the overhaul program, "allows target locking with remarkable precision and duration for helicopters that are constantly under vibration and experience sudden movements." Another recent addition that we can most likely assume to be included is the Hasib radar, inducted in 2005. In addition to the basic navigational radar of the Hasib, it is almost certain that a basic tracking radar has been equipped as the addition of the FATTAR (AIM 9X) AIM launch ramp as air to air defence requirements necessitate. Iran engineers have put to good use the experiences learnt during real combat during the long 8 year Jange Tahmili. The composite rotors will be ideal for the hot sandy desert operations that wear down the blades and clog the intakes.
Most people don't realize that Iran has the world's 4th largest rotary wing fleet with the Badr Base in Esfahan with HESA and Iranian Aviation industries is the largest heilcopter and light aircraft manufacturing facility in the Middle-East and South West Asia. Iran's rotary fleet exceed sover 1000 machines with 150 plus HESA upgraded 2091 Super Sea Corbras (AH-1J) upgraded to AH-1Z standard, 100 MI-17/8sh, over 300 Bell/HESA 212/214/UH-1, 89 CH-47C Chinooks, Panha, Shahed 285, Bell 206 Kiowa armed scouts etc.

IRIAA (Havanirooz) has had an exceptionally outstanding experience with the Cobra and they proved to be a nighmare for the Iraqis in the Jange Tahmili. The IRIAA developed its own tank hunting techniques with steep angle attacks or ambushes from behind hills or sand dunes, mostly operating in pairs and supporting ground troops who were extremely happy to see the ubiquitous Cobras that lended a big morale boost to the Artesh, Sepah and young Basijis taking of the brunt of Saddam's armor with mostly RPG's and some AT-4 Saggers. The sight of Cobra's skimming the ground at merely 30 feet and blasting Iraqi armor was electrifying. I am sure the new generation of tandem warhead TOOPHAN (improved TOW) on these new helicopters will even prove more lethal for Iran's enemies.

Very good comments by Anonymous, particularly in regards to the experiences in Jange Tahmili.

This leads to the next logical tactical question. Since you never fight the same war twice, what threat does Iran expect to use these anti-tank helicopters against?

Iran is a large country with over 1.64 million square kilometers of varied topography with out 60% mountaineous terrain. In the west, Iran have natural defensive mountain barrier than runs from Kordestan, Ilam to Khuzestan just north of Dezful. This Zagros chain and the foothills combined with the natural obstacles of Karun, Karkeh and Arvand Rood to the South also make successful invasion difficult. The Iraqi army that invaded Iran on many misconceptions was no slouch by any standard and had the best weapons systms their western masters could provide. The Iraqi mobile SAM and AAA (anti-aircraft artillery) was much better than what the US helicopters and aircraft had encountered in Vietnam. Particularly, the ZSU 23mm quads, French Crotale and Roland SAMS as well us unlimited SAM6 tracked and SA 2 (telegraph poles).

For these reasons and many others a succesful invasion of Iranian hearland from the the east via Sistan or Khorasan is even more difficult due to largely exposed terrain and long supply lines and excellent Iranian HUMINT (Human Intelligence) in Afghanistan and Pakistani Baluchistan (the only possible invasion routes). To meet this contingency a new IRIAF airbase and a new IRGC corps has been formed at Birjand. These forces have robust rotary and fixed wing armed aircraft support including the HESA P4 (project 2091) Cobras and MI-17sh.

Nader use these photos on the jamejamonline.ir farsi link below. They give a much better view of Tufan's indigenous weapons systems and the new 20mm Vulcan type cannon that is similar to the US Phalanx system.

Iran has also reverse engineered and militarized the U.S. Bell 206 Kiowa Scout helicopter, and introduced it as the Shahed 285 armed helicopter. This is a 1.4 ton helicopter, using mainly Russian parts, armed with a turret mounted machine-gun in front, and rocket pods on stubby wings. There is also a navy version, which carries the same weapons. The Shahed 285 is not able to carry the heavy anti-ship missiles Iran has. It is basically a battlefield recce and scout helicopter. This one ton helicopter has a top speed of 226 kilometers per hour, and a range of 250 kilometers. It has a mast-mounted sight, which carries a powerful FLIR (heat sensing camera) and a laser designator. The old US made Nell 206/ OH-58D were also lightly armed, and usually only carries four TOW (Toophan) type(anti-vehicle) or Misagh1 (similat to a Stinger) 70mm unguided (or guided) rockets. Planned upgrades include new, and improved, electronics, but also the possibility of a much needed new alloy light-weight engine that HESA and Esfahan based Iran Aviaton Industries are developing.

This is a response to that first comment
dude Please weak up!

2ndy maybe you should take a better look at the pictures

in the pix u can see some of them have brand new guns & others are still carrying the same old guns some of them have new IR sensors some still carry there old....
in one of the pictures we see only some parts of the aircraft that hasn't been painted yet
now I ask you does it make sense to only paint some parts of a brand new Aircraft???
Come on dude It's clear these are just overhauled cobra's
nothing more

Are you Bozorgh or Havanirooz from WAFF, sir? Excuse me for being naive.

try not to be naive

Are the Iranians so retarded they think they can put a fake plastic TSU on the front of a non-TOW Cobra and expect to pass it off as some kind of new development? Whoever designed this nose could have at least put some windows in it and put some fake optic components behind them. Instead they put "Remove before flight or operation" warning stickers on the front? WTF? A clue to the clueless: you take those red covers OFF when the helicopter is flown. Morons.

Looks like besides being STUPID you are also BLIND. The "red plastic" that you ignorantly see is the sun's reflection off the FLIR glass above the 20mm cannon. At least buy glasses before such moronic comments.

I think Iran managed to steal some new technology from US helicopters dcrashed in Iraq!

Great work by iran i just want to know that are these up grades available for any other brother islamic country or only for iranian military.