9. Decides that Iran shall not undertake any activity related to ballistic missiles capable of delivering nuclear weapons, including launches using ballistic missile technology, and that States shall take all necessary measures to prevent the transfer of technology or technical assistance to Iran related to such activities;

It should be pointed out that as was the case in the preceding round of sanctions, how these potential new sanctions are implemented is a main source of concern, as they represent a potential point of contact or flash point for open hostilities between the US and the Islamic Republic of Iran. Last time around, a number of US Navy observers speculated that a literal reading of the sanctions resolution empowered the US to stop Iran related ships. It didn't happen on any significant scale. Whether or not it will happen with this coming round is again, at this point, an unanswered question.

Another concern is the focus on Iran's missile systems. Missiles are the cornerstone of Iran's defense, which is based on deterrence. Take away that means of deterrence from attack, and Iran is pretty much as vulnerable as Iraq was in 2003. Now, there are several types of missiles Iran depends on. There are the anti-Ship variety, some of which Iran assembles from Chinese sources. There are the anti-Aircraft variety, of which Iran has recently purchased the S-300 but Russia is stalling its delivery (under the sanctions, they will be non-deliverable). And most importantly, there are the short range (SRBM) and medium range (MRBM) ballistic missiles, which provide the main deterrent force to Iran's defense. Once again, it's open to interpretation, but the sanctions prohibit construction and test use of "nuclear capable" missiles. There's the potential for the US to consider the Shahab and Sejil type MRBMs "nuclear capable". 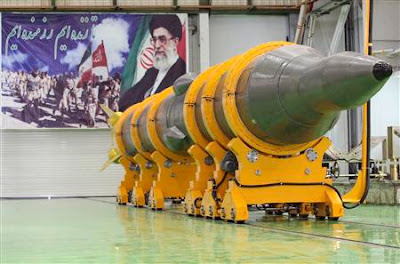 Sejil-2 medium range ballistic missile
Also potentially included are Iran's space launch vehicles (SLVs), such as the previous Safir series, but more importantly the upcoming Simorgh type (which some observers accuse Iran of a dual-use technology effort toward an ICBM or more efficient nuclear capable MRBM). Keep in mind, that using the so-called nuclear "alleged studies" as a justification, the US (and Israel) are already seeking classified information regarding Iran's MRBM reentry/warhead design, which would enable their efforts to undermine this element of Iran's defense. This is one of the reasons Iran has pushed back on this particular IAEA request. These elements of the newly proposed sanctions further empower these efforts at compromising vital aspects of Iran's military defenses. 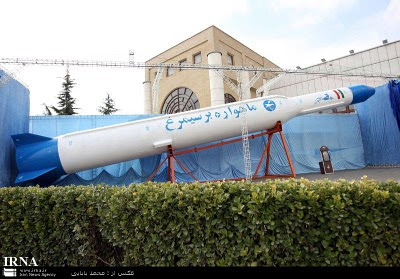 Simorgh space launch vehicle
Again, it's all in the implementation, as Iran isn't going to suspend its missile defense or space launch efforts. As such, these potential new sanctions certainly represent 1) an escalation of confrontation, 2) inescapable confrontational events in the future (such as MRBM test launches and SLV launches) and 3) the potential for points of actual conflict, particularly at sea.
There is the interpretation that these elements of the proposed sanctions package have a lot less to do with nuclear weapons proliferation, and a lot more to do with pursuing other objectives related to Israeli military threats against Iran. Note that in previous sanctions attached to the Islamic Republic, an arms export ban was instituted in an effort to prevent Iran from contributing to the defense needs of allies such as Lebanon, Hezbollah and Hamas.
Posted by Mark Pyruz at 3:33 AM

From Iran's national security and defence perspective these sanctions are worse than the ones imposed on Iraq in 1990 as they will choke off a large part of Iranian deterrent capability and defensive manufacturing. They will also provide the stalling Russians with a fig-leaf to cancel the delivery of $650 million S-300 air-defence system contract ordered by Iran in November 2005 and still not delivered. Eventually the search of maritime vessels and cargo inspections will lead to a conflict as envisaged by the US neo-cons and Zionists who have been baying for Iran's blood since 1979.Hopefully, the Chinese who yield the only wavering Veto in the UNSC will exercise it and save the world from a lot of grief. These sanctions are an auto-pilot for a regional war or much worse.

This is what the Zionist mouthpiece DEBKA is reporting. Most of the "intelligence" on the DEBKA site, which is more likely manned by two old ex-Mossad retired ladies in a Tel-Aviv apartment is wrong or deliberate disinformation, it gives an insight into Zionist wishful thinking and scaremongering.

S-300 effective against air or missile attackWhile joining the US in backing a softened UN Security Council sanctions package against Iran, Tuesday, May 18, Moscow is reported by debkafile's military sources as surreptitiously training Iranian Revolutionary Guards crews at Russian bases to operate the advanced S-300 interceptor-missile systems, which are capable of fending off a potential US or Israel attack on Iran's nuclear facilities.

UN sources disclose that the new sanctions motion - in its present diluted form - does not expressly forbid the consignment of this weapon to Iran.
Moscow is withholding them from Tehran for now, keeping the promise prime minister Vladimir Putin gave President Barack Obama. But if and when the weapons are delivered, Iran will have trained crews ready to operate them.
In their push to develop military ties with Iran and its allies, the Russians earlier this month also agreed to sell Syria MiG-29 fighter jets, Pantsyr short-range air defense systems and armored vehicles in a major arms transaction.
Washington and Jerusalem have known about the presence of IRGC S-300 missile crews at Russian training bases since early May. But when Israeli president Shimon Peres raised the issue during his talks with President Dmitry Medvedev in Moscow on May 9, he was told sharply that neither Israel nor any other government is entitled to tell Russia to whom it may give military assistance.
And when US diplomats in New York and Moscow were instructed to ask their opposite numbers whether the training program augured the shipment of the interceptors to Iran, notwithstanding Putin's promise, they were greeted with deafening silence.
On May 11, the White House was worried enough to send the president's nuclear adviser to tell reporters: "The United States has made clear to Russia that delivering a promised advance air defense system to Iran would have serious implications on US-Russian relations."
This was the sternest admonition for Moscow to be heard ever from an Obama spokesman. This time, the Russians responded with equal abrasiveness. Foreign minister Sergey Lavrov, who was with President Medvedev in Ankara at the time, shot back: Moscow needs "no advice from across the ocean" about the sale of the S-300.
These less-than-diplomatic exchanges aside, the fact remains that Moscow's consent to start training Iranian missile crews has strengthened Tehran's hopes of the interceptors' early delivery. The Iranians are even more encouraged by the success of the Russian-Chinese bid to delete from the UN sanctions draft any substantial expansion of the standing international arms embargo that might apply to the sophisticated S-300 anti-missile, anti-air system.

I think that the US has miscalculated about these current sanctions. Today countries like Brazil, Turkey do not need the USA rather the USA needs them. Will we see the end of the UNSC, me thinks yes. What are countries like Britain or France doing at the UNSC with veto powers?

The time seems ripe for the "kick" to weaken the UNSC, whose sole objective is to promote and threaten countries into the US political orbit.

Yes, it is indeed amazing that puny basketcases like France and UK (with barely 60 million people each) are on the security council and many large and powerful nations like Brazil, Indonesia, India, Turkey or even Iran are not. There are close to 2 billion Muslims in the world and not a single Muslim nation is on this archaic Anglo-Euro centric club which simply does not reflect current global realities or demography. It is indeed time to overhaul the global security arrangements and get rid of post-Yalta institutions like the US controlled UNSC. The US is getting more marginalized and irrelevent by the day. The declining US and its two little lapgogs UK and France dictating to the rest of the world is a bit rich, if not downright humiliating for over 95% of global population. It is neo-colonial UN aparttheid, where a tiny white minority clings on to eroding power and causes havoc. China is the only non-white nation on the UNSC has to act more responsibly and save the world from future conflicts.

Iranian official ar calm and careless are about new Sanctions.

@Albroz
can you tell us what they should do?

I think Alborz meant that Iranians are not worried about the draft.. since Iranians consider the actions as "toothless" (meaning not functional)

Sanctions will increase the grip of the Basij and the Pasdaran on Iran , sanctions will be a great blow for the reformist movement.

the reality is iran has offence againest usa in few month the latest is the contract with turky and barazil to put them infront of political ingagament to realized what iran is up to in many years againest west, they will be quiete in few days to make new political offence as alwayes said any offence theire is a good deffence must be face for ,usa did theire move just wait and see as mataky said is just political move would be in term of 5+1 when is in effect no one nows ,other issue nam is move powerful than un at this time so they play chichen you must creat the roster.

usually after each round of sanctions, the iranian politiker become laud, noisy, angry and making defiant speechs , pro government students going some rallies.