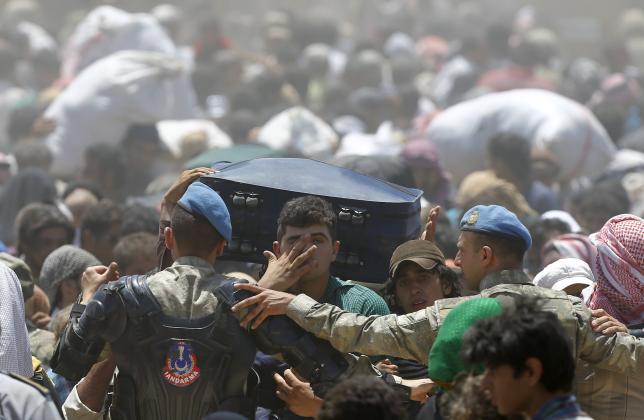 The YPG, the Syrian-Kurdish armed unit that led the liberation of Kobane in January, is now battling ISIL to capture Tel Abyad, a Syrian town at the Turkish border. Seizing Tel Abyad not only deals a blow to the Islamic State, but also would help the YPG to link up Kurdish-controlled areas in northern Syria. This could be a major step toward establishing an autonomous Kurdish regional government in Syria.

YPG fighters were battling ISIL militants at the eastern outskirts of Tel Abyad on Sunday, Reuters reported. They are pushing into ISIL stronghold of Raqqa province and threatening one of its supply lines to Raqqa city, ISIL’s de facto capital.

I wish a creation of the Kurdish statehood, and It will be more important where they could establish autonomous Kurdish region in Turkey.....

I hope you realize that Kurds are Iranian in origin? When one talks of "Kurdish statehood" it could only mean two things. One,the breakup of established states and creation of a new Kurdish state or two,unification of Iran zamin since theft by Ottoman Turks.

@Uskowi
It has already started in Iraq and Syria. Problem is where will it end? Will it end with the breakup of Iranian Kurdistan,Azarbaijan and Balochistan? For reference look up the neocon map of the new middle east. Call me a conspiracy theorist if you may,but I wouldn't put it past the IRI intelligence units to forment discord within Iran's borders for the possible breakup of Iran into different fiefdoms to be run by ex IRI officials during the collapse of the Islamic regime.For reference look at what happened to the USSR by placing ex KGB members into position of promeninence in future "Russian federation". With Islamic regime placing Iran closer to Shia Iraq and creating fuzzy borderlines,it's just a matter of time when you will see thousands of angry Iraqi shia males being employed by IRGC units to crush any possible resistance to the Islamic regime or "Shia federal states" by the Iranian population.After all the Islamic authorities only recongnise Shiasm as a former statehood as opposed to being Iranian.

Nader Uskowi, do you favor Kurdish separatism in Iran too?

Non-Kurds do not have much control over the events. An independent Kurdistan, comprising Kurdish territories in Iraq, will become a reality as soon as Barzani holds a referendum on the question. He probably would wait for that move until he has enough oil export revenues and until ISIL's threat subsides a bit more. In Syria, the Kurds could form an autonomous regional government soon. Totally different situations in Turkey and Iran, where the Kurds are not ready to secede and might not see in their own interests to do so for now. If they so decide, they can't be stopped except by overwhelming use of force against them.

I personally do not believe that's the way to keep any nationality within a country; including Scotts in Britain, Catalans in Spain, or the Kurds in Iran. If the Islamic Republic is concerned for such eventuality, they should start massive investment projects in the Iranian Kurdistan; stop discrimination based on ethnic, language, or religious origins in the region; and grant internal autonomy, including regional parliament, as envisioned and codified during Iran's Constitutional Revolution of 1905. The Pahlavis did not adhere to those principles, neither the Islamic Republic so far. Let the Kurds want to stay in Iran.

But Uskowi the Kurds were always a part of Iran since over 2500 years ago. What makes you think that any regime in power will allow Iran to be broken up for some neocons in Wasington? Like every other Iranian within its borders the Kurds have a stake in Iran's economics and political future.On the other hand all Kurds from Iraq,Syria and Turkey are welcome to breakup and join their original motherland. That also applies to Baku as well.

Anon,
I was not advocating for Kurdish independence from Iran. I was saying nationalities could not be forced to stay in a country, they should want to stay. We can't talks with both sides of our mouths: we love Kurds, they are part of Iran, but God forbid if they go for independence we will massacre them! And don't fool yourself, no other Kurdish or Azeri community will want to join the Islamic Republic!

Uskowi,I didn't say the Islamic Republic! I said the Kurds from those countries are welcome to join their motherland Iran.Iran and the Islamic Republic are two seperate things like Germany and NAZI Germany.
After all,the sun always comes from behind the clouds.

Analysis should be based on the situation on the ground, irrespective of the position of the clouds relative to the sun.