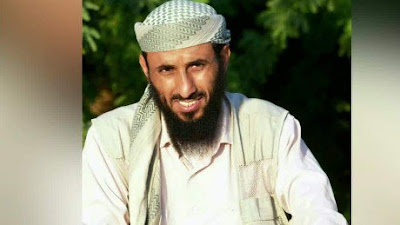 The leader of Al-Qaeda in Arabian Peninsula (AQAP) Nasir al-Wuhasyshi was killed Friday in a U.S. drone strike in Yemen’s Hadramout region, Yemeni national security officials today told CNN. Al-Wuhasyshi was the No. 2 al-Qaeda leader globally and the head of its branch in Yemen, the AQAP. He assumed the command of AQAP in 2009, and had previously worked as a private secretary to Osama bin Laden. This is a significant blow to the organization's leadership.

File photo: AQAP leader Nasir al-Wuhasyshi who was killed in Yemen on Friday 12 June 2015 in a U.S. drone strike. (CNN)