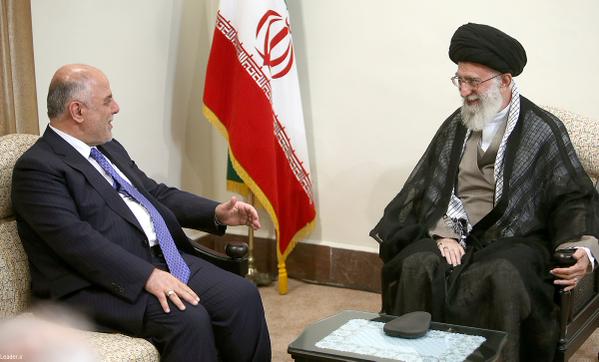 The Iranian leader blamed foreigners for the conflict in Iraq, saying Western intelligence agencies wanted to destroy the pillars of Iraq’s political and national unity.

“One should vigilantly and carefully stand against (Western intelligence agencies) plot and divisive attempt and not allow the unity among the Shia and Sunni and Kurd and Arab to be damaged,” Khamenei told al-Abadi. (Press TV, 17 June)

“The Americans on the one hand are seeking to plunder Iraq’s wealth as they o in some other countries in the region and on the other hand impose their demands [on Iraq] as before. However, one should not allow this objective to be realized,” Khamenei added.

Blaming foreigners for national disasters, like what’s happening in Iraq, has been the norm in the region, a convenient way to explain away internal problems. Khamenei’s comments today on Iraq, however, raise that practice to new heights.

"Blaming foreigners for national disasters, like what’s happening in Iraq, has been the norm in the region, a convenient way to explain away internal problems. Khamenei’s comments today on Iraq, however, raise that practice to new heights."

It's possible that, on one level, Khamenei's remarks may be provided as counterpoint to Western depictions of Hezbollah, Ansarullah, etc. as products of the IRGC (rather than local, disaffected, regional populations prompted into movements by circumstances deemed unjust, and supported by Iran).

Foreign countries could and do exploit situations in their favor. But blaming the current insurgencies in the region on foreign intelligence agencies, and not looking at the political and social dynamics that have led to uprisings and insurgencies, and not just in Iraq but also in Syria and Yemen, is very short-sighted, and too convenient for Khamenei and other regional leaders.

It is high time that Islamic societies and their leaders take responsibility for the disastrous state of the region and do not hide behind concepts like foreign conspiracies to explain all recent developments. If militants in Iraq, Syria and Yemen were not bent on starting unrest and civil war in those countries, no foreigner could. The current conflicts in the Middle East is fueled by extremists offering reactionary solutions on how Islamic societies should be governed in the modern times, fueled further by Sunni-Shia sectarianism dividing the region. Khamenei needs to worry about those factors and not just foreign intelligence agencies.

Islamic Rebublic has to be blamed also for massacres in the american schools, churches, courts, Mc Donalds and so on, and maybe for enslaving other people too.