EU Parliamentary Delegation Blocked from Speaking to Media in Tehran 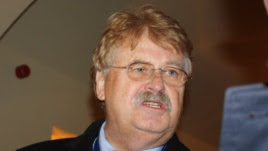 Tehran-based reporters say Iranian security personnel on Sunday stopped a visiting delegation from the EU Parliament from speaking to foreign media in Tehran. The delegation, headed by Germany’s Elmer Brok, had planned a press conference at their hotel at the end of a two-day visit. Brok was also prevented from speaking to reporters outside the hotel and reporters were forced to leave. (AFP, 7 June)

The delegation had earlier met senior Iranian politicians including Majlis speaker Ali Larijani and Masoumeh Ebtekar, a deputy to president.