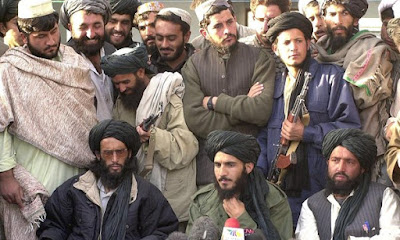 Esmail Kowsari, a member of the Iranian parliament’s National Security and Foreign Policy Committee, today confirmed that a Taliban delegation had visited Iran last month. The delegation was headed by Tayyeb Agha, who is in charge of the Taliban’s permanent mission to Qatar. Tayyeb Agha is a former secretary to the Taliban leader Mullah Omar.

“They expressed readiness for negotiations and traveled to Tehran for talks,” Iran’s Young Journalist Club (YJC) quoted Kowsari as saying.

“Iran welcomes those who want to resolve the issue via dialogue and negotiate with them to solve the regional problems,” Kowsari added. (YJC/Trend, 7 June)

Earlier, Iran’s foreign ministry spokeswoman Marzieh Afkham had said the ministry was not informed about the visit.

File photo: A 2001 photo of Tayyeb Agha, seated at center, during a press conference in Spinbaldal, Afghanistan. (The New York Times)

This news broke earlier in the week. It represents a potentially expanding Iranian influence in Afghanistan, that it can possess relations with both sides of the struggle in that country.

These people can't be trusted as far as one can spit.But both are cut from the same rotten apple.

The news broke earlier in the week, and was immediately denied by Iran's foreign ministry. It was only today that an Iranian official confirmed it.

It's good to hold talks with all parties involved in any conflict, Afghanistan's no exception. The Iranians could play a very constructive role here. It is also interesting that the Iranians openly hold talks with the Taliban at a time when Iran is not very happy with President Ashraf Ghani and his regional/foreign policies.