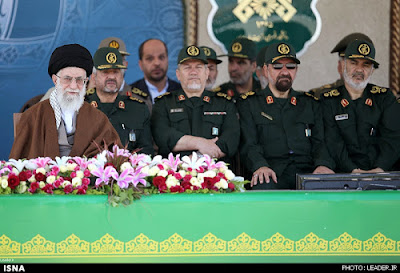 IRGC Maj. Gen. Mohsen Rezaie said in Tehran today there were no plans to deploy Iranian troops to Syria. The Syrian pro-regime newspaper as-Safir reported on 3 June that 20,000 Iranian and Iraqi fighters were being deployed to Syria. The newspaper report came after Quds Force Commander Gen. Qasem Soleimani had reportedly said on 31 May that the world would be “pleasantly surprised” by what his forces were preparing with Syrian military commanders.

Rezaie’s comments today were meant to dispel expectations that Iran was prepared to deploy tens of thousands of ground forces to Syria in response to recent battlefield victories by the opposition. The number of Quds Force and IRGC advisers and specialists currently deployed to Syria is probably in hundreds not thousands. The Quds Force has so far relied on Hezbollah and other foreign Shia militia fighters to provide the ground troops to do the fighting. Deploying thousands of ground troops would have been a major shift in that strategy, which has been in use for more than four years of the Syrian civil war.

IRGC-QF has also relied on Syrian NDF and in cases elements of SyAA.. Expectations are that IRGC-QF is to be involved in defense of Syrian coastal province of Latakia.

it well may be that Iran's regime didn't plan to deploy gound forces in Syria...and merely got sucked into it as the Assad forces kept losing ground and deteriorating.

Deploying ground forces at those numbers, especially to a country which does not border Iran, would indeed be a major change of strategy. I don't expect it happen, even in Latakia. Probably more QF advisers and other IRGC specialists. But the region's full of surprises!

Assad is badly losing big time.The Islamic regime has no choice but to send their troops into Syria to defend their position against collapse in Tehran. Remember what mullah Tiyeb said as regards drawing a red line in Syria in defence of the Islamic regime in Tehran,"If we lose Syria we will lose in the streets of Tehran."

Where are and what is going on with Generals like Firouzabadi or Ataollah Salehi ??