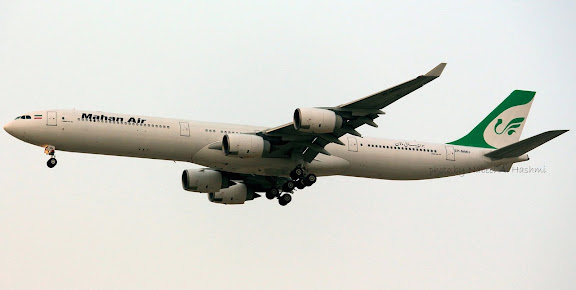 Iran's Mahan Air, blacklisted by Washington, bought eight second-hand Airbus A340s and one Airbus A321 in May in defiance of U.S. sanctions. Iran's semi-official Fars news agency reported last week that the planes would be used on international routes.

The U.S. Treasury department said last month that Mahan Air had a "blockable interest" in the planes, meaning they could be subject to an asset freeze, raising the possibility that Washington may attempt to have them seized at airports outside Iran.

"As long as ... a disruption has not taken place, we cannot make a definite assertion. But if it happens, Iran will take legal action," said Alireza Jahangirian, head of Iran's Civil Aviation Organization, according to the Iranian Students' News Agency (ISNA).

COMMENTARY: According to Flightradar24 data, sanctioned aircraft registration EP-MMH (cn 391) is currently undertaking international flights from IKA to destinations in Dubai and Turkey, just as the Fars News article cited above stated as the intent of Iran and Mahan Air (see table below). Above photo may well have been taken at DXB.

Ramifications of a U.S. seizure of this aircraft would likely impact current negotiations over the Iranian nuclear power program. The Iranians frame any new sanctioning efforts by the United States as "contrary to the spirit" of the nuclear negotiation process. That the Iranian negotiators would be undermined by an aircraft impoundment may also come into play were IRGC to be calculative of such an end, for it's understood IRGC views potential disclosures over its ballistic missile program and military industrial complex as detrimental to Iranian national defense. Additionally, a seizure might provide said political interest inside Iran with the added boost of popular opinion, in depicting the Iranian people deprived of safer air travel by a hostile power. Thus this is a potentially high stakes move by the Iranians, with the burden now placed on the United States to determine if impoundment will result from acquisition and operation of international routes undertaken by Mahain Air EP-MMH.