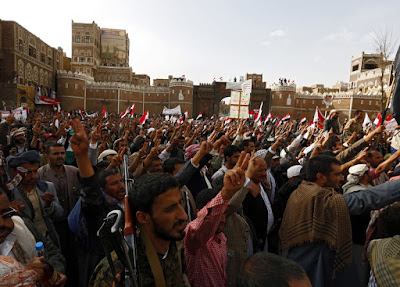 Deadly car bomb hit the Yemeni capital of Sanaa on Saturday after peace talks in Geneva ended without agreement. Today’s explosion went off outside the Kobbat al-Mahdi Shia Mosques after the midday prayers. The Islamic State (ISIL) claimed responsibility for the attack, saying in its Twitter account that the bomb targeted Huthi militia, whose fighters attend the mosque. On Wednesday, ISIL had claimed responsibility for four car bombs the detonated near Shia mosques and outside Ansar Allah headquarters in Sanaa.

Meanwhile, Saudi Arabian Foreign Minister Adel al-Jubair told the Russian broadcaster RT that the Saudi-led coalition would go ahead with its military operations against the Huthis. He made the comments after UN-brokered peace talks failed.

“The Kingdom and its allies are committed to defending legitimacy in Yemen and stopping the militia allied with Iran and the [Lebanese] Hezbollah from controlling Yemen,” al-Jubair said. (RT, 20 June)