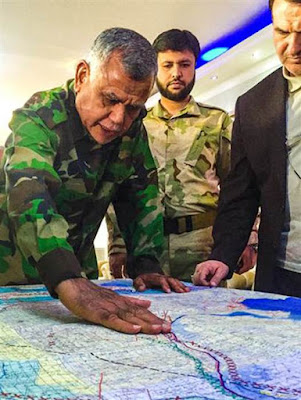 Hadi al-Amiri, the chairman of Badr Organization, Iraq’s largest Shia militia group, told NBC News on Monday that in the fight to recapture Ramadi, he expects more from the Americans. The U.S. has conducted more than 50 airstrikes against ISIL positions in Ramadi since they captured the town last month, but Amiri said those strikes were not “very effective.”

“America is not and never has been my enemy,” Amiri told NBC. The U.S. airstrikes “could be very important,” and U.S. trainers would help the Iraqi army. Earlier, Amiri had hosted U.S. ambassador to Iraq, Stuart Jones, at his house in Baghdad.

Amiri added that the Popular Mobilization Forces (PMF), the umbrella organizations of predominantly Shia militias, is capable of retaking Ramadi in weeks, not months. “We stopped ISIL when they were 12 to 15 miles from Baghdad,” Amiri said. Taking Fallujah, however, should have priority, Amiri added.

This could be good news.

Fallujah has symbolic and military meaning in the war against ISIL, and PMF has been prioritizing it's retaking.

Amiri is not the only one critical of the number and scope of U.S.-led tactical airstrikes. It's pretty much a universal complaint. When compared with the initial stage of OEF-A, the difference is profound.

As it stands right now the airstrikes are too few and infrequent. The coalition need to deploy forward air controllers so that more targets may be identified.