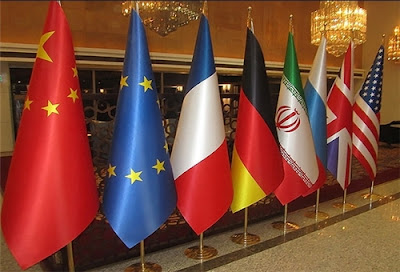 P5+1 and Iran have decided to extend JPOA measures until 7 July to allow more time for negotiations to reach a long term solution, said Marie Harf, U.S. State Department spokeswoman. Ministers are expected to leave Vienna on Wednesday morning. Next ministerial meeting will probably be held on 5 July.

President Obama said he was hoping to reach a deal with Iran, but questioned whether Iran will agree to the outlines of the framework agreement reached in Lausanne, given recent statements out of Tehran (Ayatollah Khamenei's redlines). "Ultimately this is going to be up to the Iranians," Obama added.

Iranian President Hassan Rouhani vows forceful return to "previous path," much sooner than "the other side could even imagine," if a nuclear agreement is violated. He did not make it clear if he believes there will be a final deal to begin with.

Secretary Kerry and Russian FM Lavrov hold a two-hour bilat meeting. Lavrov said after the meeting that progress has been made and discussions on some "procedural" issues will continue. He later said the deal is "within reach."

After 2 hours of one-on-one between Kerry and Zarif, there was a U.S.-Iran bilat including Kerry, Zarif, Salehi, Moniz, Fereydoun, Sherman.

Kerry and Zarif met one-on-one after the Iranian FM came back from consultations in Tehran with Khamenei and Rouhani. The meeting lasted 1 3/4 hours. Kerry said they had "good conversations." Zarif said he was in Vienna to get a final deal; "And I think we can," he added.

Deadline for the talks is midnight. Expected to be missed, with talks continuing for few more days.

As in the past, fingers crossed a deal is struck, or at least negotiations continued...

The perpetual carousel continues for reasons only known by their puppet masters.

It does appear both sides recognize a need for some level of success apart from the nuclear issue.

MENA is in such a mess right now Iran's inclusion in efforts toward conflict resolution is more than ever deemed necessary. Additionally, opening up the Iranian market is seen as providing the global economy with a needed boost, especially for Europe. Such is also recognized within the Iran camp as highly advantageous.

This remains a political dispute, and in both camps domestic politics come into play. Thus the negotiation process, with the multitude of players (a disadvantage, really) is difficult and time consuming.