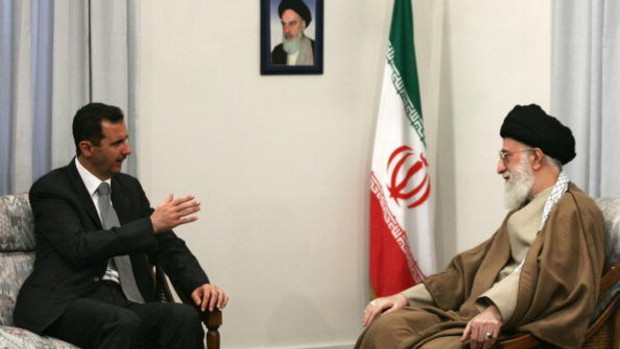 Iran is spending billions of dollars a year to prop up the Assad regime in Syria. A spokesman for Staffan de Mistra, the UN special envoy to Syria, told Bloomberg on Monday that the envoy estimates Iran spends $6 billion annually on Assad’s government. Nadim Shehadi, the director of the Fares Center for Eastern Mediterranean Studies at Tufts University, said his research shows that Iran spend between $14 and $15 billion in military and economic aid to the Damascus government in 2012 and 2013, averaging more than $7 billion a year. (Bloomberg, 9 June)

The estimated $6-$7 billion figure in annual military and economic aid to Syria, which includes delivery of all crude oil needs of the country, does not take into account the annual expenditure for hundreds of Quds Force military advisers and other IRGC specialists deployed to Syria or the money spent on the Hezbollah and other foreign Shia militias operating under the Iranian command in the country. Those figures remain classified.

Steven Heydemann, who was the vice president for applied research on conflict at the U.S. Institute of Peace until last month, told Bloomberg earlier this year that the value of Iranian oil transfers, lines of credit, subsidies for weapons for the Syrian military, military personnel costs and supporting Hezbollah and Shia militias fighting in Syria, Iran’s total support for Assad, would be between $15 and $20 billion annually.

All these billions squandered on foreign adventures. Meanwhile Iranians are selling their organs to put daily bread on their tables. To put this into perspective the regime is spending the equivalent of constucting four Tehran metros annually on Assad and his henchmen alone. Add this to the cost of supporting Hezbollah in Lebanon and the astronomical thefts that are conducted within the regime,then any body with an ounce of common sense can predict were this will all lead too.

Iran and Syria signed a mutual defense pact in 2006, so assistance cited above should be viewed within that context.

It's being reported at al-Monitor and anecdotally by Erdbrik that Iranian support for Syria and Iraq is supported by the full spectrum of inside-Iran politics, including reformists.

One does have to scratch their heads as to how Iran manages this, while at the same time massive construction sites are being erected, monumental art is being erected, ornate parks are developed, etc.

The so called "Defense pact" seems to be very one sided,therefore putting unnecessary burdens on the Iranian people,which has lead them to economic ruin. The regime simply manages this by taking out of the mouth of an Iranian and instead feeding it into the non Iranian. A few token ornate parks are being built while Irans natural beauty like lake Orumiyeh and the forrests of mazandaran and all living creatures within are laid to waste. Massive construction sites are erected to cover money laundering operations through theft and embezzlement of oil funds to lubricate the machinary of the IRGC and all its affiliates. These are the realities in todays Iran.

I second this. Absolutely to the point.

True the mullahs have spent and will continue to spend massive amounts in Syria, however, it should be viewed in the context of strategic depth. Syria is important to the survival of mullah regime as its elite are heavily invested economically and diplomatically in that country. It's a trade-off that has an opportunity cost: less development at home to prop-up a despicable tyrant.