Hezbollah Demonstration against anti-Islam movie, Beyond the Headlines! 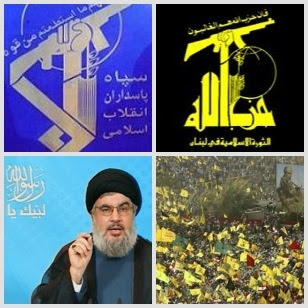 Mr. Nasrallah used the recent controversy of the anti-islam film as an opportunity to display his political power by calling for demonstration on September 16, and have them materialize on September 17th. If only Mr. Mousavi wielded the same power in Iran, but that's another story.

It must be said that the Hezbollah demonstration was well organized and PEACEFUL, in contrast to the violent demonstrations led by Sunni fundamentalists in other islamic countries.

The Hezbollah leader used the opportunity to refocus the anger on Israel and the USA, and try to appear to defend the Christians (some of whom are his allies in Lebanon, and others allies of Assad in Syria) from being blamed for the film, which was made by an Arab Christian.

Mr. Nasrallah called for the demonstrations on TV with a different banner in the background. He used a unifying Islamic banner of the prophet behind him, as opposed to the usual sectarian Shiite banners he is more accustomed to using.

With the Hezbollah leader attending in person, despite the risk of assassination by the Israelis, this demonstration went a long way to demonstrate that Hezbollah is still locally powerful, regardless of the survivability of their allies, Iran and Syria--I'm sure by now every political party in Lebanon knows that.

The only open question remaining is if the Saudis are willing to accept the message Hezbollah is trying to convey, and decide not to pursue their long standing efforts to eliminate, or at least weaken Hezbollah by all means necessary. I personally doubt that, as the Saudis seem to be very driven when it comes to sectarian conflicts, and aim to win the sectarian battle in the name of all Sunnis in the region.

I don't know if you knew, but the Hezbollah demonstrations had nothing to do with the anti-Islam movie; just FYI.

The man is the bloodsucker of Iran.

This man and the organization that the gangster regime supports,will miserably fail to try and derail what is really going on in the Arab world.
Assad's genocide of the Syrian people.

Uskowi Uskowi! wow.are you seriously still contemplating if saudi arabia can beat the midde east's shiite forces? cmon MAN! arab nationalism...aka sunni orderis dead. it henchmn all proved to be western money lovers and they never helped claim 1 inch of palestinian land. that argument is dead on arrival. Iran is leading the new cavalry and the US Middle east policy is is a handicap. i hope you already know this.

Every time I see this mans face,it reminds me of this lunatic I used to transport to the asylum.

To answer your comment, the statement about the Saudis has nothing to do with Arab nationalism, or the west. It has to do with the Shiite Sunni tension in the region, and Iran vs Saudi sectarian policies.

The Saudi were against the Tunesians, libyan, and Egyptian uprising, but they stayed neutral and let events unfold. Their givernment's position then was not admirable, but understandable, as they probably didn't want to be the next dictatorship to fall.

In the case of Bahrain, they Were clearly not neutral, and saw a shitte uprising at their doorstep as an extensional threat, and they intervened forcefully.

In case of Syria, they did the opposite of what they did in Bahrain, they supported the Sunni revolutionaries, against a regime led by alawiites (an off shoot of Shiite sect) enthusiastically without any thought to the possibility that they could be next. Tgeir sectarian loyalties seem to have overtaken all other considerations.

In Lebanon, they've always supported the political forces that provided the counterweight to the Shiite hezbollah, and since based on the rules left by the French, the prime minister is always a Sunni, the Saudis focussed on strengthening that position, and the west and Israel were just too happy to let them do their thing, as it was in line with the goal of weakening the militant Hezbollah.

The Saudis appear as committed to fighting the Shiite as they did in fighting the soviets in Afghanistan. Just like Afghanistan, they weren't the ones doing most of the fighting but theie support was crucial, and at times coincided with US interests in the region.

Iran on the other hand quashed its own democracy movement then supported the Shiite uprising in Bahrain against its Sunni rulers.

Iran is against the uprising against the allawittes in Syria for many reasons, but for a government based on religion, they appear to find it hard to get past their gut instincts to rally around their sect at all political cost. In that sense Iran is no different from the Saudis, they just represent the polar opposites of the sectarian element of the current middle east conflicts.

the saudis are very far from alone in opposing Hezbollah's subversion of Lebanese sovereignty, and, while,Hezbollah is quite significant, it is going to be greatly weakened by the end of Syrian support and protection.
iran's power and influence among the Arabs is on the wane and has been for more than a year.