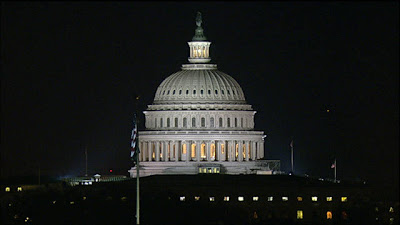 In a bipartisan show of unity on Iran, U.S. senators passed a resolution in the early hours of Saturday for the United States to pursue a non-containment policy if necessary to prevent Iran from acquiring nuclear weapons. (CNN, 22 September)

Senate Joint Resolution 41 states that time is running out on diplomacy, and it “rejects any United States policy that would rely on efforts to contain a nuclear weapons-capable Iran.”

The resolution received only one vote against, that of Republican Senator Rand Paul from Kentucky. “A vote for this resolution is a vote for the concept of preemptive war,” Paul said.

Email ThisBlogThis!Share to TwitterShare to FacebookShare to Pinterest
Labels: Iran-US relations, US Senate

A very highly unusual insult to the President. Even though foreign policy is exclusively within his realm of authority, Congress saw fit to stand shoulder-to-shoulder with a foreign leader than their own President's judgment.

Since this was not a declaration of war, its efficacy is negligible, but its affront to the Presidency is unprecedented and undeniable. This should boost Mitt Romney's fledgling candidacy if he plays it right.

The Congress is an Israeli Occupied Territory... what a bunch of shills...

foreign policy is not at all EXCLUSIVELY within the realm of the executive.

the legislature quite explicitly is given authority to consent to or to reject any treaty initiative......

and MUCH more importantly it is the legislature that has the entire authority to declare war.

and of paramount importance, it is the legislature that decides which of the executive's foreign operations will or will not be funded.


furthermore, it's utter tripe to say that the Congress is standing with a foreign leader when what they did was underscore the stated policy of the administration that when and if iran starts to assemble weapons the US will not accept it and will act to prevent iran from so doing.

Over 20% of American children in poverty and 45 million without healthcare, but the USA has money for Israeli Parasites.

If I am in Tehran, I am good with that policy... take it to break-out capacity and then push it sideways for a year until the heat in Washington cools...during that time, non aligned movement is advanced to condemn sanctions... Israel is effectively blocked from acting directly- leaving little more than staged terror and false pretext ops- i.e. no presentable justification for preemption. If Tehran now sits back and waits, like a jaguar hiding in the brush... not much can be done (by conventional means)