Mehdi Rafsanjani back in Tehran 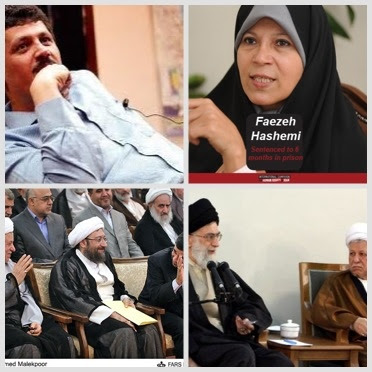 He BBC reports that Mehdi Rafsanjani, the son of  Ayatollah Akbar Hashemi Rafsanjani, has returned to Iran aboard a flight from the UAE. He is expected to face charges for having a role in the post election disturbances in 2009, while presumably attending college (oxford) in Britain at the time.
It is probably no coincidence that Mehdi's sister was arrested and sent to Evin prison a day prior, to serve a 6 months sentence for anti-regime political activities. More to come in the coming days I'm sure.

Considering that most reformists would not survive the customary vetting process in the upcoming presidential elections in Iran, Rafsanjani senior is probably one of few semi-reformists immune to disqualifications as a candidate, given his status as one of the founding fathers of the Islamic republic. The regime maybe trying to dissuade him from running through the persecution of his children.
Posted by Unknown at 12:45 AM

I wish you could listen to the stuff you guys write for once. Silly !

Could it be that in a country ,when one breaks the law gets the book thrown at him or her ?? simple as that !
You guys always compare Iran to the Shahs time and to other Hollywood conceptions of ME states and justice system.
No wonder nobody likes to make an intelligent comment anymore here, feel free and insult me too, not coming back to read it.

Do you really think that I would be kinder to the regime if you threatened to boycott the site?

The following concept might be alien to you, but since we are beyond the reach of the Iranian regime, we are free to write whatever we want, and you are free to give any counter argument you wish. Nothing personal, that's just the way freedom works

Are you saying that there is justice under this hypocritical mullahcracy?

No 5,56 pm
he is saying you to be too stupid to understand.

In the US, an officer who refused to go to Iraq, because he believed the war was declared on a false pretext, was also prosecuted.

Rafsandjani's children who decided to operate against the state and came back, have to be accountable for their deeds according to the Islamic Republic's laws.

The Islamic Republic, at this time, is the only valid representative of the Iranian nation.
The rest, like remnants of previous monarchy and symphatizers of those who harm Iran, are clowns or foreign paid agents...

@anon 2:37
All indications are that Iran doesn't have an independent justice system, and that the courts are liberally used to persecute, and not just prosecute.
I know this probably doesn't mean much coming from a paid Zionist agent like me.

For your informmation, I would like to provide you with an information that in a country where you are probably now, one can lie in front of a jury; under the oath, and the court is not interested to help in investigation of that matter after a time.

"he is saying you to be too stupid to understand."


Oh please learn to read the time properly when I posted,before you call anybody stupid!

---- " Are you saying that there is justice under this hypocritical mullahcracy? "--

not at all. what that person and the other thing presently calling himself Dissident is saying is that what passes for iranian law will be used to imprison anyone prominently and actively disagreeing with the devolved apes who are in power in Iran at present.

@"dissident"
Could u repeat what u said In English please.
Thanks in advance.

Which comment (please specify time-hour) do you expect to be repeated?