Amid Increasing Signs of Political Rehabilitation 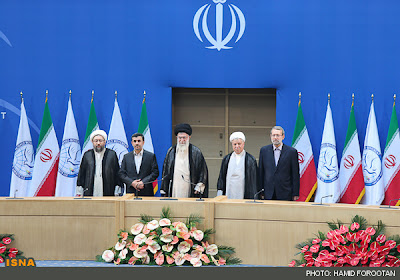 Former Iranian President Ayatollah Akbar Hashemi Rafsanjani told a gathering of university professors, administrators and students in Tehran on Monday that a “free and transparent election” could play a major role in ending the current political and economic crisis in the country. Rafsanjani made the comments during a week that saw the free fall of the country’s national currency, the rial, losing 20 percent of its value in just three days.
Rafsanjani has been playing an increasingly important role in the Iranian politics. During the recent NAM Summit in Tehran, he stood next to Ayatollah Khamenei, Iran’s supreme leader, at the podium. The photo, shown above, probably was the clearest sign that the former president and the current chairman of the Expediency Council has been politically rehabilitated and could play a major role in the upcoming presidential elections, expected to be held in March 2013.
Rafsanjani’s comments yesterday on the need for a “free and transparent election” were deliberate reference to the disputed presidential election of 2009, where Ahmadinejad was reelected amid public outcry on the accuracy and transparency of the final vote count.
The massive street protests and the political crisis that ensued created an anti-government feeling among a significant segment of the population, especially the youths and the educated, that still lingers after three years. Rafsanjani’s call for a free and transparent election is an attempt to restore public confidence in a governing system that faces enormous challenges internally and externally.
Photo Credit: Former President Akbar Hashemi Rafsanjani (second from right) standing next to Iran's Supreme Leader Ayatollah Khamenei during the opening ceremony of NAM Summit in Tehran. 30 August 2012. (ISNA/Hamid Forootan)
Posted by Nader Uskowi at 2:28 AM

Rafsanjani is a cunning old fox and the idea man behind the IRI.

But this sly old Usbek is not to be believed anymore.

People must realize by now,that this genocidal regime cannot be reformed.If they think that,then they are no better than the Ayatollahs.

Rafsanjani Khatami or Khameini Ahmadinejad,none of them care for Iran only themselves and how to steal more.
All are criminals,and all should be put on trial.

what ever you may say about him...he is as close to moderate as you can get.

I believe that Rafsanjani will run and will be a very strong contender, if devewlopment of events (war), will not change plans for the next year election.

In previous years, after rumors circulated that he (Rafsanjani) no longer is seriousoly considered, SL Ayatollah Khamenei during a public meeting, pointed toward Rafsanjani and said - you are a pillar of the Revolution. Recently Mr. Khamenei appointed him as the Expediency Council's chairman.

Is that the same "moderate" Rafsanjani,that back in the 1980s ordered the executions of 10000 or more political prisoners?
Is that the same "moderate" Rafsanjani that ordered the assassinations of political opponents of the regime abroad?
If he is the moderate in that regime then god knows what the others are like.
You people either weren't born then,are possible supporters of the regime or have very short memories.
What ever the case,this bloodthirsty charlatan is not to be believed,and besides the time is running out for him.

There are a lot of west residing sighei and Sandisti Rafsanjani supporters.