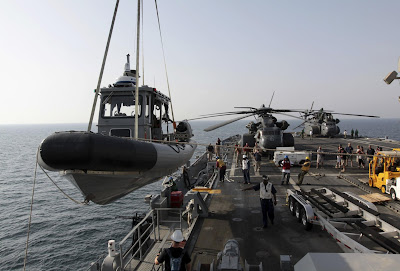 A U.S. Navy boat is lowered to the sea from the deck of the USS Ponce, a floating base to support mine countermeasure operations, in the Persian Gulf on Saturday.

This is an unfortunate and funny name for a ship. You should find out the English (UK) meanings of the word "ponce". Then, it will become clear.

In response to the now deleted comment by anon, stating that the name ponce is unfortunate and funny.


Ponce, pronounced "POAN-say" is named after ponce, Puerto Rico, which is in turn named after Juan Ponce de Leon (1460?-1521) who was a Spanish explorer and soldier who was the first European to set foot in Florida. He also established the oldest European settlement in Puerto Rico and discovered the Gulf Stream (a current in the Atlantic Ocean). Ponce de Leon was searching for the legendary fountain of youth and other riches.
Sources:
http://www.navy.mil/submit/display.asp?story_id=63892

Ignorance is not funny, it's tragic!

JF--- "ponce' is used as a slang term to describe a man who dresses ornately and with questionable taste, purchasing his gaudy clothing with money that he takes away from the women he compels to earn it in indecent manner.

Anon 10:33
That explains why there is no IRIS ponce.

The pronounciation difference not withstanding, this is a great example of superficiality in the minds of some.

Instead of commenting about the name, I wonder if regime defenders noticed that the arrival of ponce in the gulf means that the US special forces first true naval based now outs these forces within striking distance of Iran without the need for third party permissions.

Who is a "regime defender"? I did not state that I am. The word ponce, is not pronounced "POAN-say" in English (UK). The letter O, is pronounced the English way, which is the same sound in other languages but, pronounced as "aaa" or as a letter O, by Americans, who are unable to pronounce it the same way.

As for the comment about ignorance; the only ignorance here is that displayed by those who seem completely oblivious to the English (UK) meaning and pronunciation of the word ponce. It's equivalent to the Royal Navy naming a ship "HMS Pimp" or "HMS Faggot" (faggot only having the offensive meaning, in the USA). Is it clear now?

Also, regarding your point about what the ship's arrival in the gulf means. Yes but, the US had that capability to have its special operations forces within striking distance of Iran and without the need for third party permission; anyway. It's not as if the "ponce" (it's still a funny name!) is the only, American amphibious support ship. Not to mention the special operations aviation aircraft in the American inventory.

@anon 12:44
I see your point. With so many Anons it's hard to be sure who's a regime supporter, my Oppologies for the insult.

I did reference the source for the pronunciation etc. as I personally don't speak Spanish.

As to the significance of the ship, I think despite existing capabilities, the pentagon must have thought that this is significant enough to keep the old ship in active duty and retrofit it for this purpose. I am basing my opinion based on stated opinions by others with military know how that seem to say that this is a first of its kind ship and that it will be temporary until a new class of ship is built specifically to be a moving permanant platform for special forces in large numbers, and not just serve as transport and temporary housing of these forces.