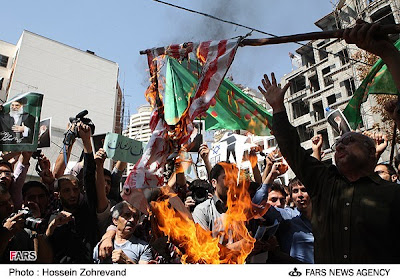 Protesters in Tehran have gathered in front of the Swiss Embassy, which handles the U.S. interests in Iran, to voice their displeasure with a contentious video denigrating the Prophet Mohammad. Mobs are also burning the U.S. flags in front of the building and chanting “Death to America.” The police are on the scene preventing the protesters to storm the building. The Swiss had evacuated the embassy compound earlier today in anticipation of such protests.

Today protesters stormed the U.S. Embassy in Sana’a, Yemen and have gathered again in front of the embassy building in Cairo.

UPDATE: The protest in front of the Swiss Embassy in Tehran ended on Thursday afternoon. There were no reports of casualties or damage to the embassy building.


This will backfire on the Islamic regime,if they continue with their bogus state sponsored demonstrations outside foreign embassies in Tehran.

This is just another ploy to cover the Islamic regimes failures.

These people should know that the American weren't responsible for the making of this 18 minute video.
They should thank the Americans that they were freed from Qaddafi. But they are so uneducated that they can't think for one minute that it was a Coptic Christian of Egyptian origin in the US that made the 18 minute video. The Egyptians should also realize this and see it for what it is,a poor and silly video.
The Islamic theocracy in Iran is typically trying to get involved, and trying to repair the damage it has caused between the them and the Arab masses as regards their support for the minority Assad regime.But their street show will amount to nothing. Because the regimes opinions is irrelevant to the Iranian people as well as the Arab masses on the street.

Anon 7:44--- i doubt that it will backfire against the regime as it has worked for them sooo many times in the past.

The same 150 people that show up in front of UK embassy were there too? It is so badly staged that it has become a joke among even regime insiders.

"i doubt that it will backfire against the regime as it has worked sooo many times in past."

What you fail to realize, is that the police took control of the situation and did not allow the mob to enter/attack the Swiss embassy.

which indirectly indicates that the situation is calm and under control, and the government is in charge.

Libya, Yemen, and those other countries are clearly instable, and far from it.

Lets not forget the NAM conference recently, where there were no major incidents as well.

The lack of such public outcry only indicates how far the atmosphere has changed, where there is no longer a real will to start an uprising since the days of the green movement.

What stupidity... And in the end these Muslims tear up their own cities and then blame someone else while looking like a bunch of Neanderthals in the process.

The western Back tracking and their apologetic approach proves they have started to learn at least how to react...

I repeat.... The attack on the US embassy was the work of Mossad to take revenge on Obama for not reacting to Iran as dictated by Israel.

...and stop calling me anti-semite, my wife is an ex-jew.

There is no such thing as ex-jew (your wife).
They suppose to be jews forever...

I agree with you that Mossad might be involved.

This Coptic Christian's admission is somehow suspicious to me, because there was also an earlier information, that 100 jews supported financially to produce that movie. In addition this movie contains sentences that a mixture of parts of the New Testament with some other teachings will create new teachings for that Muhammad (prophet).

Was this "Coptic- Christian" really interested in that kind of "mixture"?

"where there is no longer a real will to start an uprising...."

You sit all smug in the comfort of the West and gloat at the downtrodden Iranian nation.
Thinking the Islamic rapists have crushed them.

A Coptic Christian makes a 18 minute video and all hell breaks loose against the Americans!

Wake up you pathetic morons,it was an Egyptian that made the video.
I've already spoken with some Iranians over this and they said it's completely blown over the top.
Looks like they are the only sensible ones and willing to see for what it is.They also said the demonstrations outside the Swiss Embassy in Tehran was staged and not more than 150 losers with beards.

There is no such thing as ex-jew (your wife).
They suppose to be jews forever...

I agree with you that Mossad might be involved.---


proving that there is at least one person who is a fool and a bigot forever in London....and there is a great deal of fossilized intracranial meconium involved,

And done with the maturity of a bunch of spoiled rotten 10 year olds...

Yeah... "Your face" just described yourself."

And you've just proved it with your childish retort.