The naming of a street in Tehran after the American political activist killed in Gaza has both highly positive and highly negative aspects to it. 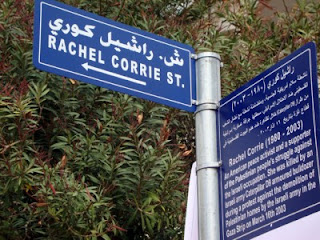 A street in Tehran has been named posthumously after Rachel Corrie, the American activist who was killed while protesting the Israeli occupation of the Gaza Strip in 2003 during the latter stages of the Second Intifada. The decision to name the street after her was just earlier this week.

I wrote a column shortly beforehand entitled 'Neda & Rachel' where I pointed out that apologists for the present Iranian regime have often cited Rachel Corrie as a way to try and divert arguments away from the brutality that the Iranian regime has exercised against its own people and furthermore argued along the lines that, a regime that oppresses its own people and ignores their heartfelt grievances whilst at the same time backing the most fanatical, fascistic and violent forms of Palestinian militancy has therefore relinquished any form of credibility when it states that it cares about the ordinary people of Palestine.

I wrote this article to reiterate that very point as I think it is an important one. However I also want to add I don't disapprove of a street being named after Rachel Corrie. As an activist she did go the extra mile in trying to show the world what it was like to live day by day in a dangerous place such as Gaza, and she done this by meeting the normal Palestinian people and listening to them and trying to understand the grievances they were burdened with. This in itself was an incredible feat for such a young woman who is well deserving of a tribute such as that of having a street or location named in her honour.

The more reactionary opponents and critics of the present regime in Tehran will probably jump on this story and demand to know why there hasn't been a street named after Neda Soltan, the innocent woman who was callously murdered by one of the many Basij thugs rampantly harassing peaceful demonstrators on the streets of Tehran after the June 2009 elections. I think this is a cheap and inflammatory question, and the answer is very obvious when you look at it from the present leaderships perspective.
Think about it, if you were part of a decaying senile fanatical dictatorial regime like that of Khameini's I sincerely doubt you'd prohibit a street being named after the woman your brutal and suppressive paramilitary forces murdered, who in death went on to symbolize the oppressed (her name, the Persian for 'voice' has been a symbolic and unifying outcome of her death for many Iranians) and also those forced on pain of imprisonment (where official policies include rape and torture) to continually remain passive and deferential to this regime in the face of mounting oppression.

The day when we will have a Neda Street is the day the present regime will be where it belongs, the history books, I for one am looking forward to that day, and I know it is bound to come sooner or later, and when it does those who knew and admired Rachel Corrie for her courage and wish to further her cause can be genuinely proud of having a street named in honour of her in a country steeped in over 3,000 years of culture, civilization and literature.

Rachel Corrie certainly can't be ventriloquised by me, but I can and will say this;
From her standpoint as someone who took a decisive stand for the human rights of Palestinians that were neglected at the hands of the Israelis I would wager a person from an identical or similar objective standpoint wouldn't accept the blatant abolition, destruction and disregard of human rights in Iran simply because the present regime there also denounces the policies (as well as the mere existence) of the State of Israel.

But that's just my two cents...

Editor’s Note: Paul Iddon is one of the authors of Uskowi on Iran. His weekly columns appear here on Wednesdays.
Posted by Paul Iddon at 6:00 AM

"ignores their heartfelt grievances whilst at the same time backing the most fanatical, fascistic and violent forms of Palestinian militancy"

heartfelt grievances of whom the upper-class and middle-class liberals

no outsiders back iran due to deaths of peace activists, those who back Iran back with complex set of economic, social and geopolitical arguments

Mr. Paul Iddon, no disrespect here but do you drink water through your nose or did fall on your head when you were young?

You should write for the NY times or the Washington Post..

Nobody cares and nobody would even have known about this if not for your article.

Well done Paul on your honest article.You are right when you said the day we have Neda street is the day the regime will belong to the history books.
That day is fast approaching the Iranian nation will give birth to a new system of governance and that does not include the reformists or anybody connected to this present regime.
Keep up the good work and do not be disheartened by crude and presumptuous comments.

Whats with the Three Ugly Sisters ?

Once again you write the truth Paul enjoyable read looking forward to next week.
The Patriot.

There's nothing wrong in honoring Rachel Corrie and her memory certainly isn't tarnished by respect from Iranians.

Iran can be looked at from the outside and also from the inside.
For some (hidden ?) reason, Paul Iddon's view is always that one from the outside.
I'm sure, some day Iran/Tehran actually will have a Neda Agha Soltan street.
Iranian 'green movement' is/was a youth movement and their struggle against certain incrustations of the Iranian society actually is/was a classical generation conflict, as young people naturally have new/other ideas of how a society should be organised.
The "regime" as Paul Iddon likes to refer to, will some day be replaced by people of Neda's generation.
And yes, this will be the day Iddon's "regime" will belong to the history books.
This isn't anything special to Iran, it's the normal process of aging of a society. It can be noticed in every country of the world. And the generation conflicts mentioned above can also be observed in every country of the world.

he must be the Hidden Iddon

Good points from Anonymous August 17, 2011 7:26 AM. That line certainly loses any credibility for the author. Paul Iddon showed his true, racist, anti-Palestinian attitude with that.

Oppressed, occupied people who dare to fight back against their occupiers are somehow "fanatical, fascistic and violent", yet those who commit the oppression and occupying, all in the name of a certain religion; get a free pass from this Paul Iddon. No better example of the double standards of pro-zionist and western media.

hey, knucklehead. rejecting extremism in Palestinian political life as as wise as rejecting it in Israeli political live or Iranian

11:45 PM, that's the point. Media sources like this article and western media generally, don't reject extremism in Israeli political life. They have a policy of sometimes saying nothing about it and then openly supporting it and promoting it. In other words, a bias towards it.