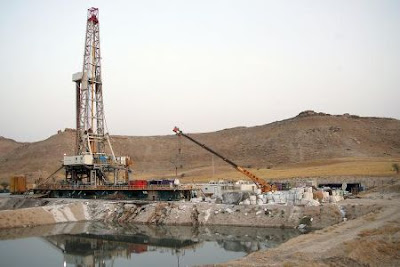 The National Iranian Oil Company (NIOC) said Iran has dropped Russia's Gazprom, one of he world’s largest oil and gas companies, from the Azar oil field development project due to the company's “numerous delays.”

“After several ultimatums and delays by Russia's Gazprom has been dropped from the development plan of the Azar joint oil field," the NIOC said in its statement [Mehr News Agency, 30 August].

The NIOC plans to sign an agreement for the development of Azar field that has a proven 2 billion barrels of oil reserves with a consortium of Iranian companies.

TO DELAY MEANS TO DENY! AND DELAYING ALSO MEANS SUPPORTING THE SANCTIONS SILENTLY - THIS IS UNACCEPTABLE to any Nation .THUMBS UP to the Government for coming up with a noble idea-REPLACE GAZPRON WITH AN IRANIAN CONSORTIUM AND LET THE TREND CONTINUE!!!

I said you can't trust the Russians!
As long as this regime remains Iran will be the victim of these leaches Russia and China and the black market.

Iran most certainly can't trust the Russians, historically an enemy.
Unfortunately for Iran, it has few friends among the more powerful nations of the world and hs attempted to curry favor with Russia and China, at considerable cost and with rather mixed results.

As Iran becomes ever more frustrated and alienates the Russians, it's left seeking protection only from China.
Unfortunately for Iran, China is not comfortable acting alone for Iran against a consensus position of the other great powers. China will do more than attempt to straddle the divide and will eventually have to follow the line urged by the others.

Learn from s300 delivery promise.At the end Iranian was just waiting an empty promise. Don't be fooled for the second time by the Russians.

Its a all calculated.

Gazprom delivered the hardware and pulled back to avoid sanctions by the US and at the same time Iranian companies with the Hardware are doing the same.

Freelance advisors of Russian origin (NOT Gazprom) are helping

The whole world is helping Iran screw the USA and Israel.

Tell us your joking right?

I don't think he's joking when you consider the fact that Russia and China has tacitly assisted Iran in the past and in this case, Anon's comment is certainly not out of the realm of possibility.

I sometimes can not understand how some really think that the USA and Israel alongside the UK are actually liked.

They are not, and when it comes to Iran everybody dislikes them (the Trio).

As can be learned from many Iranian blogs concerned with foreign affairs, Russia is increasingly viewed by Iranians as a very unreliable partner, not only regarding oil field development (Azar oil field, Gazprom), but also regarding nuclear technology (Bushehr) and arms contracts (S-300). Iranians feel that the Russian side isn't honouring its contractual obligations, and that Iran should not conlude any more contracts with Russia, but should intensify its trade relations with China instead.
Correspondingly Iranian-Chinese trade volume jumped to $13 billion in the first 4 months of 2011 and will reach up to $40 billion by the end of this year, whereas Iranian-Russian trade volume was stagnant at $3.65 billion for the first half of 2011 and could further decline towards the end of the year.

Most likely replaced by an IRGC owned and operated consortium. IRGC Incorporated!

Russia is not a country of trust. It has been so and it will remain so. The reason that they do not have many friends in the international scene is just because of that. They have not been Iranian friend and they will continue to pretend they are. One thing must be clear to Iranian that they are using us to have pressure on west specially US. As long as they gain something from the conflict with west they change all the agreement with Iran.