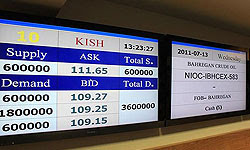 Kish Oil Exchange, set up in the Persian Gulf island of Kish, opened for business last month to act as a major trade platform for Iranian light crude. On 13 July, the National Iranian Oil Company (NIOC) offered the first batch of 600,000 barrels of sweet crude to be traded at the exchange, but due to its high asking price no trade was registered. Yesterday, NIOC offered another 600,000 barrels at the asking price of USD 113.22 per barrel and a premium fee of 85 cents a barrel. Again no buyers were found and the exchange closed without registering any trade.

Apparently, the NIOC does not fully comprehend the nature of commodity exchanges. After spending a huge sum to set up the ultra-modern Kish Oil Exchange building, complete with electronic billboards and hundreds of computers and all types of amenities, the NIOC produces only two relatively low-volume batches of light crude in nearly a month (instead of having the supplies available on daily basis) and then sets up unrealistic minimum bidding prices and at the end comes out empty handed on both occasions. This is not the way to run a commodity exchange.

Meanwhile, the NIOC today reduced next month’s crude export prices to the lowest level this year. It set Iranian light rude for September shipment at USD 1.01 a barrel over the average of Persian Gulf benchmark Oman and Dubai grades, down USD 0.60 from August.

My friend it should not be called NIOC anymore but IRGC.This is what has become of our country when its governed by a illiterate mullah ridden prayer rug theocracy.

Where are the "I told you so" folks??..This news should give them a field day bashing Iran...

Anon 10:43 AM...Told you so! This is not about bashing Iran but bashing a despotic and hypocritical regime to different things.

How do you know this reports are actually not for the US benefit.

For them top rejoice at the supposed collaps of a deal that happens 100 times daily in NewYork and London.

The actual deals could be done in a 1000 different ways and styls. :D

The 2 month old bourse isn't generating as much business as the 50+ year old bourses in the west, it must be a failure!

Anon 11:54 AM, the word “failure” referring to the structure of the oil exchange was used by Fars News Agency, the country’s semi-official news organization. Please direct your sarcasm to them!

WOW, seems people just revel in bad news from Iran..This news should be enough for their daily "Iran's going to fall soon" fix..

Mr. Nader, would you like to run the NIOC personally? Since nothing they do ever satisfy you, maybe you should put in an application for the job so you can run it better than anyone else for us and save Iran from the MAD MULLAHS!!!

Won't be holding my breath,though...

Thanks for your support, but I guess Gen. Qasemi would be a strong minister. He might have read your comment, so be very careful these days!

Respect to Nader Uskowi he and Iranians like him makes me proud to be Iranian.Mr Uskowi will do a damn better job of the NIOC or any other company in Iran than all the regime put together.

---"How do you know this reports are actually not for the US benefit."----

It's pretty easy to know that oil is trading for less than $90/barrel...and the prices is currently dropping.
So if Iran's NIOC has a take-it-or-leave-it price of $113, they're not going to find too many takers.

If you think that Iran has a brilliant strategy of spending a bunch of money to build a trade center that doesn't do any business as a ruse, you're being silly. Large oil contracts involving the transfer of large sums of cash as well as the physical transfer of shiploads of oil aren't going to go unnoticed.

The simple truth is that Iran has problems figuring out how to do business.
And the sanctions are proving to make things much more difficult. Beyond all the money that Iran is not getting from India, there are billions more that is not being collected from oil sales to South Korea.

@Nader Uskowi - You make a very good point regarding the strange pricing behaviour of NIOC. But your analysis of the causes of that disinclination to buy falls a bit short. Actually world economy is cooling down and there is a dimnishing demand for oil. This is a very unfavorable moment to start a new oil bourse. Worse, most probably nobody really took notice of the Kish oil bourse starting operations, as most people are on vacation right now. All this can change very fast, if the oil bourse is better advertised, people are back from vacation, NIOC is lowering prices to an appetizing level luring possible customers into trying out something completely new to them and world oil demand is increasing again.

Hello Mr. Nader i thought this might interest you.

Steve, I'm not really sure about the idea that no one noticed that there was oil put up for sale because most everyone's on vacation.

I kinda have the idea that folks are buying and selling oil around the world year-round and a half-million barrels put up for sale wasn't simply unnoticed.

Let's try going with the more likely fact that not anyone was willing to pay way over the market price for the pleasure of doing business with iran.

I love people who find one fault rather than look at 100 accomplishments. It's especially funny when you look at their own lives, which are often in such disarray that you are looking at 100 faults amongst 1 accomplishment!

First, thank you for this update. But two questions:
1.Why do they do not offer proper prices?
2.Why are they posting the price in $? Wasn't the whole point to get out of $ hegemony?