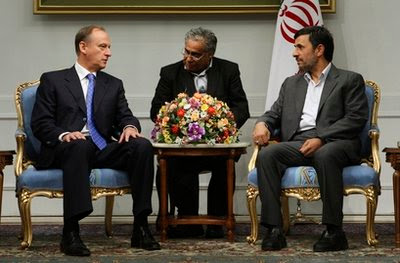 Russia can not be trusted they still have not completed the Bushier nuclear power plant they are milking Iran dry under the incongruous and desperate regime in Tehran.They are not working for Iranian benefit look at Caspian sea we use to have 50 per cent now only 13 per cent with friends like that who needs enemies.

And why did IRI government sign off on the 13% deal for the Caspian Sea, when it could argue strongly for 50% share? After all the former Soviet republics bordering the Caspian should have shared their total 50% share amongst themselves.

I have not seen or heard an agreement where Iran has agreed to a 13% share or any other agreement for that matter about share. Can you please let me know where this info is coming from and from when?

As far as I remember every meeting about share discussion ending in no agreement as Iran has insisted a higher share.

I was responding to the comment made here. But on the issue of the convention of the sea talks on the Caspian: the argument, latest in Baku in November 2010, has not been about 13% vs. 50%, but about 13% vs. 20% (five equal shares) of the underwater resources. While the Khatami administration has already suggested the five-equal-share formula (20%), Russia is arguing that the equal share in sea conventions for underwater resources is based on the way the median line is drawn, and based on the particular geography of the Caspian, that formula will give Iran some 13% of the underwater resources.

Iranian reliance on Russia regarding its nuclear dispute with the West particularly the USA has left it weak on the Caspian Sea negotiating table between the five littoral states.
Russia has gone ahead and signed the treaties with Kazakhstan and Azarbayjan as well as Kazakhstan and Azarbayjan signing their own treaties.
What Iran originally wanted was to divide the Caspian Sea region into five equal parts after the break up of the Soviet Union.At first Iran and Russia announced that they would adhere to the old treaty
but what happened instead was these four remaining littoral states went their own way especially Russia our so called friend what this means is that these countries disregarded Iranian newly proposed one fifth equal share claims as regards Caspian state demarcation lines and resources.
What these four littoral states have done is to give Iran a 13 per cent remaining share of the Caspian Sea which of course Iran has weakly rejected.This is why Russia can not be trusted they are using Iranian weakness and isolation to their advantage basically Iran was thrown a bone just like a lap dog and Iran has not challenge this very important issue.
So what this boils down to is that Iran after the dissolution of the Soviet Union suicidally and incompetently gave up its right towards 50 per cent ownership of Caspian Sea and therefore the four remaining littoral states have gone their own way disregarding Iranian sovereignty towards those waters.

I agree with the adjectives you have used describing IRI government’s approach to Iranian sovereignty in the Caspian: suicidal and incompetent.

In 1921, Reza Shah’s government signed a treaty with the new Provincial Revolutionary Government of Russia, headed by Lenin, dividing in half the underwater resources and demarcation lines of the Caspian between the two countries. In 1940, Iran and the Soviet Union signed a secondary treaty reaffirming the equal division of the Caspian between the two countries. The collapse of the Soviet Union and the creation of the four Caspian republics in its place should not have changed Iran’s share. Those republics needed to share their total 50% share amongst themselves.

The acceptance of 20% formula by the IRI government, then headed by Khatami, was not only suicidal and incompetent, it was treacherous, not unlike Qajar-era treaties with Tsarist Russia.

Its not Russia... its if the USA would be allowed by AIPAC to accept solving the problem.

Last time the Brazil solution was torpedoed at the last minute, because no perrmission was granted.

we shall see... or is this another prelude for a new resolution... this time demanding something ungivable and then war !

Iran should get ready for war.. no matter what.

Mr Nader Uskowi thank you for your agreement regarding this extremely important issue.

Well when you have an incompetent government and a leadreship who have to "bribe" the Russians and the "Chineese" for their support (Which they don't even get. The Russians and the Chineese have signed every single UN security Council sanctions) then it doesn't get any better than this.
These people are traitors.

Anon 7:30 AM
I agree they are traitors to everything which is Iranian.They only want to preserve themselves at the expense of Iran and Iranians.

Hate to tell you this but in international politics, everybody bribes..There's no such thing as real "friends"..Nations only have interest..The US supports Israel because AIPAC makes sure all congress men/women who matter are well catered for.Much to the detriment of the US itself.But does it matter? Maybe not now but that sh*t will surely hit the fan soon with all the rising debt and austerities.

What more do you supposed Iran should do regarding the Caspian sea issue? Go to war with the Russians? Or turn Iran over to the Americans so that all will become rosy again..??


What I don't get is that, the people who blame the current Iranian government for all of Iran's problems don't realize that a lot of these problems where inherited from the so called reformists, whom they support without question..Get your principles straight..If you're going to criticize, at least lay the blame where it should.

Kinda like the people here in the US blaming Obama for the current economic mess in the US forgetting that they're the very same people who voted for Bush and rallied round the flag to burn all their dollars in useless wars in Iraq and Afghanistan..The US is no better off today than it was 10 years ago.

The Russians have indeed been milking Iran dry with this nuclear issue and have used it as leverage to gain concessions from the west. I don't think Iran bribes them or the Chinese for anything. The downside though, is that Russia's credibility is rock bottom as many countries are not signing big time contracts with them. Production of S-300 missiles have come to a halt as there are no more orders for that product. Now some of you may think, well, so what?? In the international diplomatic dealings, credibility is as important as anything. You lose it once and it it'll take decades to repair.

It is true some of the littoral Caspian countries have gone out on their own to divide the sea. Now that's very dangerous because any unilateral actions by these state can only result in war which nobody in the region is ready for. The former Iranian reformist president did virtually nothing regarding this issue yet the current government is blamed for it..???

This is just business.......do any of you people really think that the Russian government wants any kind of friendship with a muslim country??? They hate you with a great passion.