First Shipment of Crude Is Sold at Kish Oil Bourse 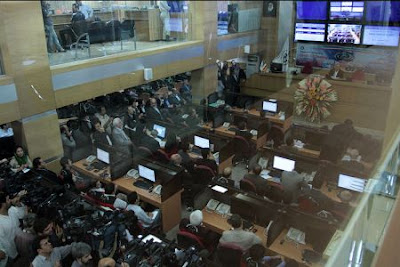 Iran’s Bourse Organization announced today that the first shipment of 500,000 barrels of Iranian heavy crude was sold on Thursday at Kish Oil Bourse, a commodity exchange set up in the Persian Gulf island of Kish to trade in Iranian crude. The shipment was sold at USD 105.49 per barrel, with no premium added. [Mehr News Agency, 19 August].

The Kish Bourse began its operation last July. Three shipments of crude could not be sold in previous sessions. Today’s successful sale marks the actual start of the oil exchange. The National Iranian Oil Company (NIOC) is planning to offer shipments of 500,000 barrels of light or heavy crude on daily basis at the facility.

congratulations to all Iranians !

This has been a dream of all from Mossadeghists to the most ignorant of Iranians (Royalists & MKO ).

It takes one to know one.

Iranians "chooned" and "chooned" until eventually they got a sale.

If Royalists are ignorant they still would have been in power today by the simple application of barbarity like the present regime.

A royalist is person who craves for a monarchy as a system of governance.

something equal to the feudal system.

Somebody in need of "Arbab"

Its an old and unmodern school of thought.. my be you would like to rethink your philosophy.

I do not mean to fight you since the fight has already been won, but maybe you would like to readjust.

And yes congratulations on the kick off of this great achievement.

Anon 7:13 AM
"fight has already been won". What fight and by whom?
If Royalist is feudal why did the Shah take the land from the feudal mullahs and give it to the peasants making them land owners for the first time in their lives which also led Khomeini and the mullahs to protest in 1963.
No my friend the mullahs are the feudal ones with gods representative on earth Mr Khamenei the Ex-Roseh khoon having the power of life and death over our people as the "Arbab".

Anon 12.54 / I think you misunderstood what he implied.(correct me if wrong anon 7.13)
Arbab- Raiat was a rehtorical sentence to imply being a subject and servant and etc.(being a nokar in essence)
But before you attack me ,believe whatever you will.Monarchy is over in Iran and over forever.
God has helped Iran and is helping Iran.

Anon 2:34 PM..You did not answer my question regarding the feudalistic Khomeini and his band of merry mullahs when they protested against the land reform program which led to the gaining of land by the peasantry and the emancipation of women.
I am only talking about facts and only support a free from mullahs Iranian government who is talking about wanting Monarchy back although that with parliamentary democracy would be a far better option than what we have now.
God has forsaken Iran as long as these baboons occupy it with their rotten presence.
Yes Khomeini the British Nokar that said "Hitch"or "Let Iran Burn for Islam"... "Let there be more Bloodshed for Islam"...When did this British Nokar once mention something in favour of Iran.
Then that Hendi Zadeh let the war go on for another six years leading the country to shed more unnecessary blood when it could have ended in 1982 in our favour.
"Old and unmodern school of thought" this coming from a man that supports a system that tells people to wallow in the mud for someone who died nearly 1400 years ago or "Can you see the imams face on the moon"or "Earthquakes are caused by naked chested women".. I mean Theocracy come ooon !!
Yeah I rather be in the Royalist school of thought thanks for the offer but no thanks.
Believe what you like as well but remember this and remember this well..This regime is a goner mark my words there is no escaping it what comes after is not yours or any bodies decision but the Iranian nation as a whole.

Anon 7:13 AM
"Its an old and unmodern school of thought".

Really? Go and tell that to Japan,Denmark,Sweden,Spain,England,
Canada,Australia,New Zealand all the advanced countries that most likely you live in one of them.
And I presume these countries are queuing up to adopt the modern school of thought from the theocratic state of Iran?

if you like mullahs or not does not change the fact that the executive are not mullahs and they have succeeded in making a big issue here.

I suggest you hit the couch and talk to someone, You are the reason I still am grateful for the revolution.

You are lucky to be protected by one of the four running this blog, otherwise you would not have had such a stage to write without the answeres deleted, making the impression you have the last word.

At least 5 of my comments have not been printed for criticizing the Monarchies in support of some of the commenst in here.

Anon 5:56 AM
I am the one of thousands of Iranians who fought a war against Iraq and saved this regimes ass.
If it was not for people like me your beloved revolution would have gone into oblivion. Where were you at the time?
The executive have performed very poorly which reflects their bosses the useless mullahs.
I suggest you should leave your narrow circle of friends and enter the real world so that you have a more balanced view of political events.
Take it from me the advice was free.

who cares if anyone is insulted by Irans success.
Well done Iran and may this be the first of many deals.

So they sold some oil in the open market what a big deal!