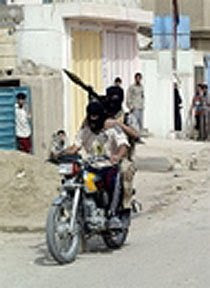 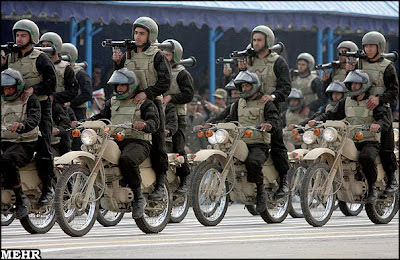 Members of the Mahdi Army have been photographed using Iranian combat motorbike tactics. As developed during the Imposed War (1980-88), the Iranians met with a measure of success using two-man motorcycle teams, with a rider and gunner per bike. Armament consists of RPG-7 type rocket propelled grenade. Top photo depicts Mahdi Army militia members in action using this type of combat arrangement. Pictured below is a unit of Iranian soldiers at the 2008 Military Day Parade in Tehran. Note the same arrangement.
Posted by Mark Pyruz at 12:25 AM

I am not one to try to downplay any links between Iran and Sadr's militia, but even Sunni insurgents (local insurgents, such as IAI), were doing this at least as early as 2005. The value of motorcycles was recognized early on because they allow individuals to flee quickly in spite of traffic congestion, after emplacing or triggering an IED, firing an RPG, spraying a magazine of 7.62, et cetera, and they can cut through narrow alleys that US vehicles cannot fit through. But, I'm not saying that Sadr's goons were not taught this by Iranian operatives. If they're giving them EFPs and mortars, then they could be training them to be motorized RPG gunners as well.

The region has seen these combat motorbike tactics in play since the 1980's. Iran used them against Iraq for years during the Iran-Iraq war. Iran's' military is still a big fan of their use, as demonstrated by their units put on display at military parades. They also demonstrate these units at military games.

The post draws attention to the use of the tactic by Mahdi militiamen, recently photographed in action.

Learning how to fly a RC helicopter is a challenge within itself, and could never be fully taught over the internet or through some book. The best way to learn is to get real flying experience with an instructor at first, and then on your own later. You can find an instructor at a local RC airplane and helicopter club. RC airplane clubs are most common and exist in just about every state and country, and since most of them will have experience with planes they most likely will also know how to fly RC model helicopter s too. Shock and vibration-proof, this light has a sonically-sealed light polycarbonate lens and waterproof housing. Incredibly long-lasting, these leds are rated for 50,000 hours. Small but powerful, it's 2 diameter x 1 D and requires a 2.25 hole for installation. You can connect to device to a TV in order to play games on a bigger screen. A PS device is on the way.

iran is great country in the world, many of great great man in there, knowledge, lifestyle, good moslem.. but now. iran in the danger situation.. i hope this can solved..
thank's
regard : Kawasaki Ninja 250R Biker !!

This method of using motorcycles is not new. On a TV program I saw a South American countries armed forces use them in narrow mountain roads while patrolling.

I think for Iran it has to do with cost, and being able to manuever faster against a country with high tech weapons.