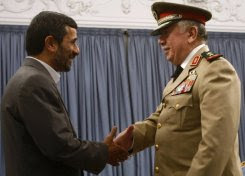 Iranian President Mahmoud Ahmadinejad shaking hands
with Syrian Defense Minister Hassan Turkmani
Tehran . 26 May 2008 . AFP photo
Iran and Syria today signed a defense cooperation pact, pledging their mutual support regarding their territorial integrity. IRNA reported that the defense pact also called for the withdrawal of “foreign and occupation forces, which are the source of insecurity and instability in the region.”

The accord was signed in Tehran during the visit of Syrian Defense Minister Hassan Turkmani. Its signing comes a week after the revelation of on-going secret talks between Syria and Israel, brokered by Turkey. Reports from Tehran had indicated that President Ahmadinejad was shocked when told of Israeli-Syrian peace talks. The Iranians had expected prior coordination with Tehran on any negotiations with Israel. Syria is Iran’s closest ally in the Arab world.

The visit to Tehran by Syrian defense minister and the signing of the new defense pact were meant to demonstrate the two allies still remained close, despite tensions in their relationship.