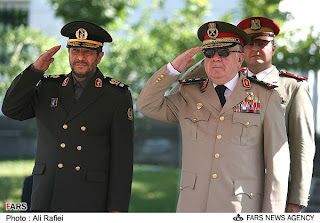 The revelation last week of on-going secret talks between Syria and Israel, brokered by Turkey, created noticeable tensions in Iran-Syria relations. Reports from Tehran indicate the Iranian President Mahmoud Ahmadinejad was shocked and in a state of disbelief when told of Israeli-Syrian peace talks. Ahmadinejad had an explicit understanding with the Syrians that they would not negotiate with Israel without prior coordination with Tehran.

Ever since the founding of Islamic Republic, Syria has been the principle ally of Iran in the Arab world. Late last year, the first signs of friction between the two allies began to be noticed. The Syrians asked Tehran to recall its ambassador to Damascus for his pro-Shia propaganda and financing religious publications sympathetic to Shia Islam. Ahmadinejad sent his vice president to Damascus as the new ambassador.

Hezbollah commander Imad Mughanieyeh, Iran’s principle ally in Lebanon was assassinated after leaving the Iranian cultural center in Damascus and meeting with the new Iranian ambassador. Some factions within the Islamic Republic suspected Syrian role in the assassination. Iran requested inclusion in the inquiry into Mughanieyeh’s death, but was denied a formal role.

The Syrian-Israeli secret negotiations added to suspicions in Tehran that Syria would do anything to get back the Golan, including dumping Iran as an ally. Today’s visit to Tehran of Syrian defense minister is used by Syrians to mend their relations with Tehran.
Posted by Nader Uskowi at 10:32 AM