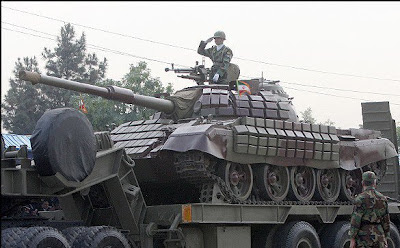 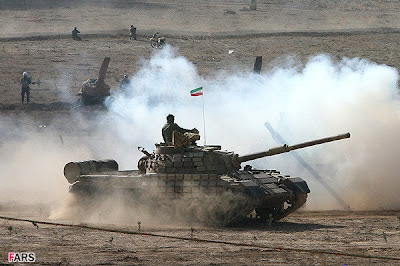 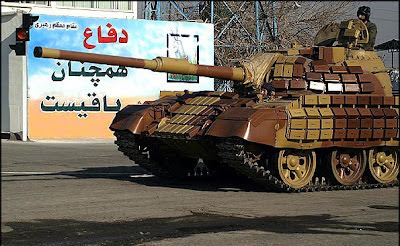 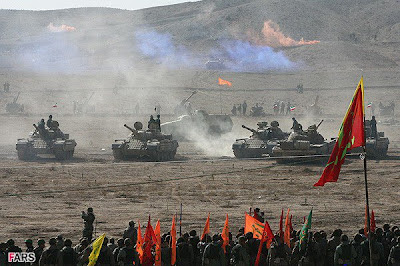 According to Global Security:

An upgrade has been developed in Iran called the Type 72Z in order to extend the operational life of the T-54/T-55 MBTs, and the similar Chinese Type 59 equivalent used by Iran, all of which are armed with a 100mm gun. The existing 100mm gun has been replaced by a 105mm M68 rifled tank gun in service with Iran on the M60A1 MBT. The Armament Industries Division of the DIO probably makes this weapon because for some years it has had the capability to bore tank and artillery barrels, such as the 122mm Russian D-30.

To improve first-round hit probability, the Type 72Z has a Slovenian Fontana EFCS-3 computerised FCS. According to the manufacturer, installation of the EFCS-3 FCS enables stationary or moving targets to be engaged while the Type T72Z MBT is static or moving. The 7.62mm co-axial and roof-mounted 12.7mm machine guns have been retained as has the ability to lay a smoke screen by injecting diesel fuel into the exhaust outlet on the left of the hull. In addition, four electrically operated smoke-grenade dischargers have been mounted on each side of the turret. At least one example of the Type 72Z has been fitted with a roof-mounted laser warning device, probably coupled to a commander's display and the electrically operated smoke-grenade launchers either side of the turret.

Iranian sources say the upgraded Type 72Z is powered by the V-46-6 V-12 diesel engine developing 780hp. This engine has been integrated into a new powerpack, which also includes the SPAT 1200 transmission for use in automatic or semi-automatic modes. The V-46 V-12 diesel engine is also installed in early production T-72 series MBTs, such as the T-72 and T-72A, and Iran could obtain these from various sources besides Russia. The Type 72Z's combat weight is quoted as 36 tonnes, power-to-weight ratio 21.66hp/tonne and maximum road speed is 65km/h. This compares with the T-55 MBT, which has a power-to-weight ratio of 16.11hp/tonne and a maximum road speed of 50km/h.

It’s very odd some trying to twists the reality.

After the invasion of Iraq who had hundred of tanks some are not touched (look back to TV photos of long T72 tanks in Tikritt city when Americans entered the city) those T72 Tanks was on sold or thieved in unbelievable price very cheep, guess what? Where those tanks can be moved Turkey, No, Kuwait, No, Jordan, No, the only place can be run easily to appreciate the helping for the invasion is IRAN.

T-72z were modified in 1994-5 from original T-54 or T-59s who are captured from iraqis during war.
You could see these modified tanks in parades in 90s when your beloved Saddam in power and there was not any military connection between iran and iraq.

So your theory is simply redicilous.
How someone could send hundreds of
tanks to Iran under nose of international media without attention....
T-72z is not so complicated tank.
It is a simple T-54 or T-59 ..that Iran captured from Iraqis in hundreds numbers in 1980-1988 war,with a new russian engine and new fire control from slovenia and new gun..105 mm like iranian M-60 A1...
and of course first generation of
ERA...like iranian licensed built T-72S.These modifications could be done in iran easiley.

PS....Americans saved about 70 T-55,T-59 and some EE-9s for
new iraqi army and then completely
destroyed entire iraqi armored force immediatelly after fall of
baghdad.

I believe in Iranian Defense Industry. It prove itself during Second Lebonan War....Hopefully the tank can do the same thing as Kosar SSN and Ababil UAV does, excellence performance..