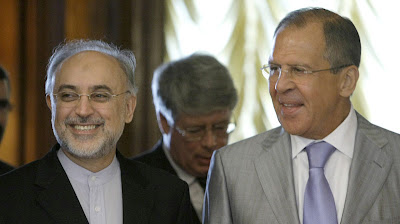 Iran's Foreign Minister Ali Akbar Salehi said today that Iran is ready to resume negotiations with world’s major powers over its nuclear program and that a recent Russian proposal will be helpful for the process.

Salehi made the remarks at a news conference in Moscow with his Russian counterpart Sergey Lavrov.

The US, Russia, Britain, France, China and Germany have been pushing Iran to meet UN Security Council demands to stop enriching uranium to prevent any Iranian nuclear weapons capability. Iran denies that it intends to build nuclear weapons but considers peaceful nuclear program, including the uranium enrichment, as its rights.

The Russian new proposal calls for a "step-by-step" approach under which the international community would gradually ease sanctions against the country for each step Iran takes to distance itself from a nuclear weaponization program.

They do not want to admit it but the sanctions are hitting hard at the Iranian economy and regime is really feeling the heat now.They have reached the dead end with this and there is no way out for them but capitulation.

"They do not want to admit it but the sanctions are hitting hard at the Iranian economy and regime is really feeling the heat now.They have reached the dead end with this and there is no way out for them but capitulation.

Name one country that's not going through economic hardship...

Anon 1:12 PM
PROOF?
Lots of countries are going through economic hardship but Iran is a different case.
Which country has like Iran banking financial economic political and military sanctions on it? Can you name one and I do not mean Zimbabwe I mean a country like Iran with its huge resources and potential.
Which country like Iran can not receive its money through transactions regarding export of oil and gas with billions of dollars of Iranian money remaining locked in consumer countries? Which country like Iran has a worthless currency that is not worth the paper its written on? Take Iranian money to any foreign bank abroad and see what happens.Over 32 years ago I exchanged 5000 Toman for British Sterling without questions asked and that was in a small bank in the country side.
Are you trying to compare Iran to Italy France Germany USA etc.. ? They are normal countries not like Iran run by religious decree and has no regard for its population except self preservation of regime and selling off Iranian assets to the lowest bidder to the Chinese and foreigners so that they will not be vetoed by the UN Security Council regarding the nuclear program.