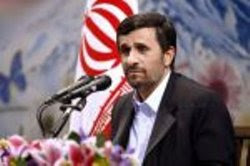 The Iranian President Mahmoud Ahmadinejad defending the recent tri-partite nuclear declaration between Iran, Brazil and Turkey, said that Tehran Agreement is a global manifesto for the equal rights of all nations.

"Meanwhile in Germany, the visiting Russian President Dmitry Medvedev called upon Iran to end its “irresponsible behavior” and heed the world community over the nuclear issue."

A day does not pass by without the Iranian/Russian relationship taking another turn for worse!

It is really becoming really counter-productive with two presidents accusing each other. Is this becoming personal rather than business?

The hope is that both foreign ministers especially Lavrov have more common sense and can keep doing damage limitation.

russian take his way to west for sure theirfore iran is alway know that never ever trust russian and russian doesnot have any ecconomy effect to iran ,i see that iran watch carfully russian and usa so is knowingly this pass must go deffenatly the make counter simmilation againest section even much worst than that so far political reason iran will focuse on middle east and latin amirica also some country in affrica country in short time may slow the ecconomy progress but in midturm iran ecconomy will flight faster than china, first three month would be slow grow by 4% after will reach in 7 to 10% by beggining next years.

Why does Iran put so much emphasis on its relationship with Russia. The alliance between Iran, Turkey and Syria in conjunction with the MERCOUR South American states is the way to go!