Saudi Arabia gives Israel use of its airspace to attack Iran 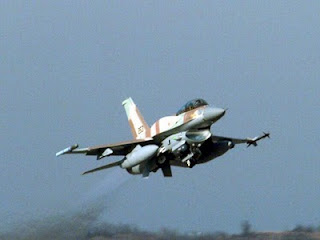 The Times Online has revealed that Saudi Arabia "has conducted tests to stand down its air defences to enable Israeli jets to make a bombing raid on Iran’s nuclear facilities."

This story has also made headlines on PressTV.

Anyone who has followed the saber rattling that has been going on between Israel and Iran will have seen this story pop up occasionally in the past few months, and has been covered on this blog.

However that doesn't mean we shouldn't take it seriously and is a development worthy of keeping a close eye on.
Posted by Paul Iddon at 10:57 AM

I am not sure that this "news" is true. It first appeared at the Zionist Debka disinformation site about 2 years ago and has repeatedly been revamped to increase pressure on Iran and sow divisions in the region.

I don't believe even the Yehudi Arabians would be this stupid to allow their territory to be used for totally illegal aggression against a much more powerful sovereign neighbour. Considering Saudi vulnerabilities in the region from Yemen, Shia minoritites to their oil infrastucture, domestic anti al-Saud groups, democracy movements etc that even the petro-pimps would be that blind to the consequences. It would be tantamount to suicide by the Al-Saud clan if they allow Zionist's airspace to attack Iran. The whole region will burn within minutes. The ramifications of such a mega-folly will make Iraq and Af-Pak look like a kindergarden picnic.

Saudi Arabia should know that once Iran finds out that SA really did allow Israel attack Iran's nuclear sites, Iran will shower critical Saudi facilities with rockets. Iran already considers Saudi Arabia a turncoat in the muslim world.Iran has to decide whether it will take all the risks of really going nuclear and fighting through it, or just halting it where it is now.

I agree. Saudi Arabia will receive a shower of Sejils, Shahab, Fajr and Zel-zel instantly, if this is even remotely true.

Those saudis better know their place, the Iranian super power will show them who's boss!

London, Jun 12, SPA -- The Ambassador of The Kingdom of Saudi Arabia to United Kingdom Prince Mohammed bin Nawaf has categorically denied allegations circulated in British newspapers that the Kingdom has given permission to Israeli aircraft to attack Iran by flying over its territories.

In a press statement today, he said this would be against the policy adopted and followed by the Kingdom.

He reiterated the Kingdomâs stand in rejecting any violation of its territories or airspace.
He added it would be illogical to allow the Israeli occupying force, with whom Saudi Arabia has no relations whatsoever, to use its land and airspace.

talk is cheap and only the stupid live by what people "say". Saudi Arabia has been "selling out" the muslim world for quite some time now- all the oil deals with the US;keeping quiet about hezbollah's victory in 2006; now this Israeli flight plan through their air space. this is why Iran has had such a succesful ascendancy-because it knows that the "custodian" of Islam's 2 holiest sites has been the devil's whore for decades.Saudi Arabia has sold out in many ways and thats why they barely critisize Israel these days. How is a shia power now runnig sunni affairs? sunni govts have mostly sold out and they are bitches. they can't fight, and since some of them have no oil, they lubricate US balls to keep their funds coming in(e.g: Pakistan and egypt.)

Kemjika, saudia arabia hasn't sold out anybody. They've spreading true islam to all corners of the world quietly and without ruffling feathers all these years and have done more to spread true islam with their oil money than any other muslim countr. If they 'sold out' they'd use their money to spread secularism. Think about it.

BTW, about those 'us oil deal', the US barely buys a few million barrels of oil from the middle east, and saudi arabia is already reorienting its oil sales to china.

The truth is wonderful when you seek it out rather than pull it out of thin air to suit your view.

Also, Kemjika, looking at your profile, it seems like you're sleeping with the devil yourself!

Why not leave satan's land and live in the islamic republic, under allah's divine law? Please, I'll buy you the ticket if you want.

I don’t blame them. The chance to see an Israeli suicide bomber up close would be irresistible.
Everyone in the ME with a camera will be there hoping to get a snapshot. They know that if they don’t get a photo of the first Zionist in history to put their own life at risk, no-one will believe them.

Kemjika, saudia arabia hasn't sold out anybody. They've spreading true islam to all corners of the world quietly and without ruffling feathers all these years and have done more to spread true islam with their oil money than any other muslim countr. ..."

Yeah true Islam. Behead people and chop their hands. Treat women like mice in the dungeons locked. BTW, spreading oil money means going to London Casinos every night and losing as usual. Preaching Allah during the day and ferrying East European prostitutes to the Kingdom during the nights. Well that sums it up. We would all love to see this true Islam go to hell and if you love these people so much why don't you go to that wretched dessert and mix with them. I am sure you will find true Islam there

Don't take me wrong. I dislike Jews as much as Arabs. After all they are all Semites. They have far more in common with each other.

Well I think Iran can come up with the same answer as Shapour the Iranian king did to Arabs. After squelching the uprising by Arabs who had migrated from Arabia to Bahrain, Shapou II ordered their expulsion to the area near Kerman. It was been reported that their shoulders had been punctured to let a rope get through as a punishment and that may be the reason Shapour was called Zolaktaf meaning owner of two shoulders in Arabic. In the old days there was a port in Iran called Bandar Shapour to remind Arabs what happens to them if they mess around with Iran. You sound like one of them as well.

i don't believed it. the news is true.

U have a good blog...but
I ENJOY THE FREE DOMAIN AND FREE HOSTING!!!
Let Change you domain blog with your name.

iran has much better position than israel ,iran plan to secure area on stratedge on seria lebonan plus turkey to chock intire area in case of war more secure to them other plan will be accured in short time is egype area that will come to reality very soon this comvoy of shipment facing to gaza from iranian red cross i hope israel do the same mistake as did in turkesh ship that will put them in the level of war with iran . egypt is importan element to iran for war with israel that iranian government focuse for years to have them in control that may come soon than later by changing new president in egypt will be commplate war with israel as israel political out come became very week in internation level this is a point of iran advantage to cut israel onece for all the first attack on iran comvoy will make iranian government to send secound shipment by navy forces in that area for ingadgement theirfore the toll war will start short to fulfield thing require distruction of israel ,it is possible to see israel for his exzestance to do wrong move to attack iran that iran most likely want to be attack that put us and intire region in dengeres level most likely uae will be in force of invation by iran force and the bridge of bassing too saudi arabia by irgc the other area such as afaghnian and iraqi is not as important as uae and saudi they are focuse on the root of this to level of combat forces to make shore their is no suprise attack will be possible other possibility is iran prepration is azarbiajan area which is short distance to capital city of iran that area has been reinforce highly for air attack than final war is much closer that us and israel anticipated.

A good man would prefer to be defeated than to defeat injustice by evil means.
sato agency

I’ve gotten good feedbacks from ASUS. Elonex ONE, I haven’t heard of yet. Thank you for this post. I have gotten information I needed to know, the comments helped as well.
sato travel military

people love blog posting me too but adter seeing your blog only.
sato travel

your blog is very nice and good for everyone.
lanzarote Map

You got fantastic nice ideas there. I made a research on the topic and got most peoples will agree with your blog.
sato travel

sato travel
You almost certainly know people who have booked Sato Travel Vacations to places some beautiful places like Europe, Hawaii and the Caribbean at cheap prices

Sato Travel Deals
You got fantastic nice ideas there. I made a research on the topic and got most peoples will agree with your blog.