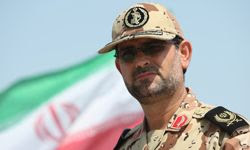 Judging by the report's accompanying photo (provided above), Tangsiri appears to be of the General rank directly below that of Brigadier General (Sartip Dovom), or the corresponding naval rank of Commodore (Daryadar Dovom). He is likely one of a number of Lieutenant Commanders in the IRGCN. (Not to be confused with the Western rank of Lieutenant Commander.)
Posted by Mark Pyruz at 3:25 AM