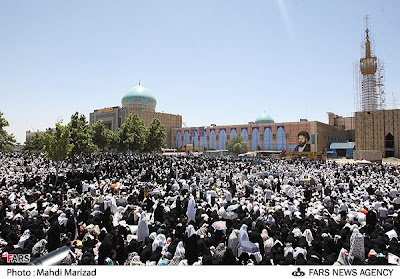 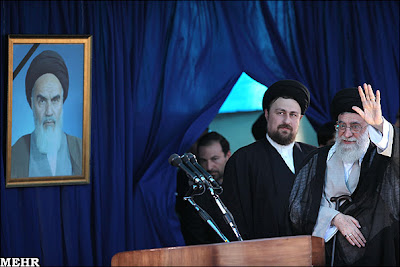 "Whoever deviates from the path of Imam (Khomeini), despite whatever power he holds, he will be thrown away by the strong hand of the people," Ahmadinejad said [Fars News Agency].

It is quite astonishing that almost 32 years since the revolution the regime still commands massive support and can mobilize millions on the streets. This indeed has been an enduring revolution and the mullahs have been very skillful in tapping into the Iranian psyche of nationalism and religion. US atrocities in Iraq, Afghanistan and Pakistan along with the Zionist savagery has been a blessing for the Islamic Republic and most Iranians who have a well defined national identity are loathe to have a foreign inspired destructive "regime change". I believe the Islamic Republic is more secure today than ever in its 32 year span.

my point is iran comming cross as been holly land of man kind for freedom and justice to fight the inhummand kind this is deffenatly pass intire world as we see day by day they gain strong political groud and unified world againest few country has tooken control world for few century if is time to say weak will be strong every day it is time right now and few years in the future theire is no stop on it what so important catolic church has not said a word to israel wrong doing that put intire christian to point of stop dispite many catolic and ortudox worker was in the freedom ship pope is silence about it as chrisian shame to see deep silence of pope.

What a load of nonsense! If there was a referendum in Iran to see who wants Islamic Republic, I wonder how many people will vote today for this regime? According to the first replies everyone is a savage except Iran (forget about people shot in the streets or raped in prison). These people must be living in a a different world. The second Anon can't even write a sentence of English without it sounding like Esperanto!

In all objective fairness, there was a "referendum" yesterday, and millions marched for the Islamic Republic. There is lot of wishful thinking and disconnect between the exiled diaspora and political ground realities in Iran. The Islamic Republic is enduring and not about to disappear anytime soon. On the contrary, its domestic and international situation is strengthening by the day thanks to your Zionist savages who have even managed to turn Turkey into an enemy. Wishful thinking and exaggerated comments of the imminent "demise" of the IRI are way too premature. However, a delsional fantasy never hurts anyone but keeps the shrinks in business.

"..However, a delsional fantasy never hurts anyone but keeps the shrinks in business."


In a civilized forum like this you are allowed to be silly but it appears to me that you are abusing this privilege. It helps to engage the brain before engaging the keyboard!

Referendum in the street. Are you serious? The vast majority of those people (as usual) were/are public sector and dependent employees who are bussed in by the government to make up the numbers. They have no choice. Face up to the realities.

Never mind empty slogans about Israel and US. Who cares about them! Let us face up to the *realities*. The Iranian economy is in ruins. The unemployment is running at 30-40%of population. The aircrafts are falling from sky like there is no tomorrow. Zero foreign investment in the country. The so called few allies of value like Russia (has Iran got really any friend of value?) are turning away. Sure you may talk about Turkey etc. However, they are desperate nations themselves (what chance Turkey has to join EU after thirty years knocking on the door, zero!). Ok Turkey and Israel are arguing these days. How does that help an average man in the streets of Iran with his employment/housing problems? Yep death to America, Russia, China, Israel, England etc and for that matter anyone else. There we go, they are all dead! Now we have the true great nations namely; Iran, North Korea, Syria, Zimbabwe and Venezuela! How about South Korea? Well that little country of under 50 Million people has an economy four times the size of Iran. For the past 30 years Iran is trying to reduce its dependence on oil exports. As of today it still depends on oil for 85-90% of its revenues. That pretty much sums it up.

Almost all of the above anti-Iran rant is the usual packaged hype. Sorry, no one is buying it. Sorry if your sensitive feelings are hurt. Take care and keep the propaganda churning.

It is not anti-IRAN at all. There is no statement above against Iran. It is all factual information about the status of nation. Nobody likes them but they are unfortunate facts. If you think they are wrong, put your money where your mouth is and prove that they are wrong. Thirty years ago the nation was united against the Shah. Today the nation is united against these tuban heads! It is inconceivable to believe that in 21st centuary, there are still nations run on religion. Whether it is Islamic Republic of Iran or Jewish republic of Israel.

These pictures remind me of 500 years ago and not 2010. That's how far back Iran has been driven by the Mullahs.

These Mullahs do every thing except for their own jobs, being Mullahs. What business Mullah has with international affairs, business, econmy, defense, industry and such things. They should be in mosque praying not in courts executing people.

In this unfortunate country every thing is mixed up and wrong people are in charge of wrong positions that are theirs to do.

bottom line they are winner of this political move no matter what are we saying they alway have better political plan for most that why is us and 5+1 can not capable to stand them because they are right to the most point in politics thats make them winner most the time beings,so people by finding information in the world wide smart enough to gudge them way.

i lov u khamenei