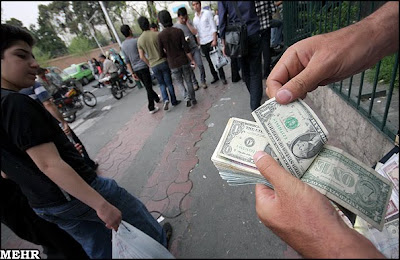 Iranian toman has hit an all-time low of 1,055 tomans per dollar in Tehran’s FX market. Since the beginning of the current Iranian calendar year (20 March 2010), the toman has started a sharp decline against dollar, starting with 950 tomans per dollar, and now hitting the historical low of 1,055. [Each toman is 10 rials, which remains the nominal official currency of Iran].

Euro has already hit a historic low against the dollar, was about time toman joined.. its good for Irans exports, but not so good for Dubai Tourists.

When dollar goes up, oil prices tend to go down. That is another negative for Iran. Additionally, Since 85-90% of Iran's export is crude oil, what other Iran's export exports are you talking about? Carpets or pistachios? FYI, Toman is not a free currency. Try it for yourself. In Hamburg go to any bank with tomans and ask for Euros. If Iran exports anything, it is always done in another currency denomination (dollar or Euro. Toman does not come into it. The only relevance of toman is that people in Iran are earning in tomans and have to spend its equivalent in dollars to get by!