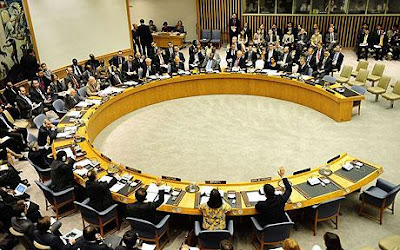 The UN Security Council today imposed its fourth round of sanctions against Iran. Twelve member states, including all permanent members, voted for the resolution. Two countries (Brazil, Turkey) voted against and Lebanon abstained. The new sanctions broaden three earlier sets of sanctions imposed on Iran, the last of which was adopted on 31 March 2008. The highlights of the new UN resolution:

UPDATE I: Iran’s ambassador to IAEA, Ali Asghar Soltanieh, told the meeting that "illegal resolutions" by the council will not stop Iran from exercising its "legitimate right to develop its nuclear program" [AP, 9 June].

UPDATE II: Reacting to new UN sanctions, Iranian President Mahmoud Ahmadinejad said they were like a "used handkerchief that should be dumped in a garbage can…They cannot harm the Iranian nation" [ISNA, 9 June].

what was China's and Russia reasoning for supporting these sanctions? Why did Lebanon abstain?

I don´t uderstand why lebanon only abstains.I think Iran must press Lebanon,shiites must work for opposite to sanctions against Iran.

Why did lebanon abstain? because hariri doesn't want syrian intelligence planting another bomb under his car!

As for the sanctions, its no surprise they passed,but US can expect more dead NATO soldiers in afghanistan.

Lebanese despite having a 70% Shia majority have the old French imperialist disproportinate government representation that gives the Zionist allied Maronites and the Wahhabi puppet Harriri greater say in the government. Eventually the Shia will take over Lebanon, it is only a question of time. The middle-east is undergoing rapid changes that favor Iran. The Lebanese abstention at the UNSC club does not represent the majority of Lebanese population.

The "international community"
have begun their squabbles already

Nobody would blame Iran if relations with IAEA are downgraded now.

Iran should simply withdraw from the NPT.