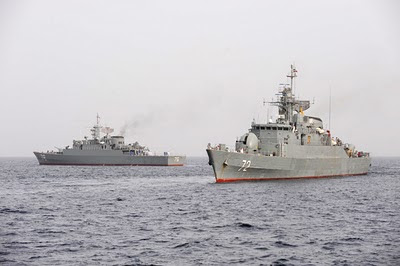 IRIS Jamaran (76) and IRIS Alborz (72)
At his latest press conference, President Ahmadinejad today warned that any inspections of its ships related to sanctions could provoke a response by the Islamic Republic of Iran.

"If they make the slightest mistake we will definitely respond," Ahmadinejad said.

Some observers have criticized Iran's naval forces for being relatively weak in overall strength, particularly when compared to the US Navy Fifth Fleet in the Persian Gulf waters. They also point out Iran's naval forces are less than state of the art. But these naval forces, while relatively small and somewhat under-equipped, are adequately suited for selectively targeted merchant shipping interdiction, including boarding, inspection and search of a ship at sea; second, taking measures including any combination of arresting the vessel, arresting persons aboard or seizing cargo. 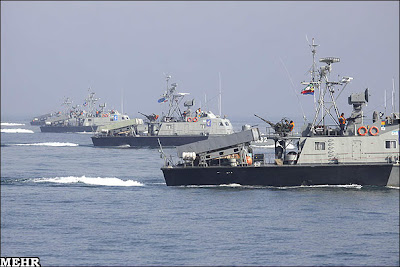 Lineup of four IRGCN Thondar class missile craft
Of course, such actions are extremely risky for the Islamic Republic, as escalation could quickly follow. However, the same risks apply to the United States, which could lead to a cascading of events resulting in the breakout of open hostilities. Just the temporary stoppage or seizure of a merchant ship by Iranian naval forces, alone, particularly near the Straight of Hormuz, could lead to a dramatic spike in shipping insurance rates and the price of crude oil. It would likely even prompt some form of active USN escort coverage.

The previous round of sanctions technically called for a potential inspection regimen of "suspected" Iranian related shipping, but it was not acted upon in a meaningful or provocative manner. The ball is again in the court of the United States, on whether or not we'll see such a turn of events associated with this latest round of sanctioning. 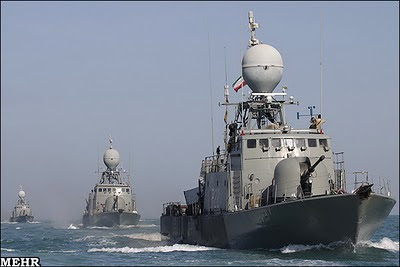 I hope the US does not get carried away and does another Gulf of Tonkin false flag. It will mean war in the whole region.

Comments from comrade Fidel Castro. A question for the dear citizens of Iran, how is the relationship between Azeri's and the rest in Iran? What do they think of the large influence of them Zionist within the establishment in Azerbajan? Are the great citizens of Iran worried of all this doomsday propaganda. All the Iranians I know here seem to be wishing that the country is attacked!

All of the Cuban exiles I know here want to see Cuba attacked by the US. Are the great citizens of Cuba worried about the past 50 years of doomsday propaganda?

@anon 2010 @2:35
Here is a good article by Michel Chossudovsky Azerbaijan and the US-Sponsored War on Iran. I think your question was a very valid one for us who do not know about Iran besides what is printed by MSM