Deal with the People

Dealing with another autocratic regime is a regressive form of rapprochement with Iran. 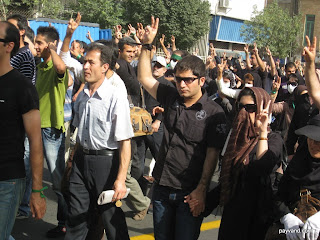 “The rhetoric is really a reflection of the continuing economic and political crisis they are facing and the realization that they face an election in which most people are disinterested.”

That was Ali Ansari reflecting upon the propaganda the regime disseminated following the recent parliamentary elections and the siege mentality they attempted to stir up.

It seems to be the case that North Korean esque propaganda is one of the few things left up this regimes sleeve (it has after all long ago squandered any semblance of legitimate or integrity), fear of outsiders always must be trumpeted. Anyone who knows anything about this regime knows that an Israeli or an American attack against Iran's nuclear facilities would be a tremendous source of exaltation for it, as it would help truly radicalise the populace and (as was the case on the onset of the war against Iraq in the 1980's) give them a carte blanche in crushing all forms of dissent under the cover of war.

However in peace time their actions against their own people can be blatant, as well as their own stupidity and ineptness when it comes to running such a sophisticated country. As we hear of a currency that is drastically declining and ultimately dwindling in value as well as prevalent corruption which is the regimes trademark it is sadly becoming more evident the downward spiral the country is facing, with its monopoly on state media and the majority of information dissemination is content to further isolate Iran from the International Community whilst propagating its own perception of reality, and trying in earnest to keep the Iranian people vigilant, not in the protection of their country -- the prosperous and hopeful future of which this regime has sadistically plundered -- but of the theocracies high standing within their country that it has set on track to become beggared and bankrupted, which it slyly propagates as the protection of Iran's sovereign integrity.

As is the case in totalitarian societies, every Iranian's life is at risk, the mere act of publicly voicing a negative opinion with regard to the supreme dictator can land you in jail, as well as get you tortured or raped by the notorious and ridiculously self-described morality police. This isn't what one would expect from a republic of any kind.

The really cheap and underhanded allusions to strong and deeply historically rooted nationalist feelings prevalent in Iran for generations of which the regime utilizes to help shore up its base really speaks ill of it. This after all is a regime that has attempted to do away with many aspects of Persian culture, a sophisticated culture and civilization that long pre-dates the advent of Islam. A cultural heritage that every Iranian should be and for the most part are proud to have. Whilst the murderous theocracy which contemptibly claims to adhere to the principles and tenants of the Shia Islam evenly balances itself by attempting to control many aspects of Persian culture by relegating large parts of it and attempting to control and censor other parts of it. But they're not completely stupid, they would never try to ban Nowruz, which is probably the most biggest display of simultaneous exaltation expressed in Persia that has absolutely nothing to do with proclaiming death to another country or offering up blood for the supreme dictator. They would never try and ban this holiday because they know they can't, that's a line even they wouldn't dare cross.

The regimes palpable isolation from their own peoples aspirations and culture was made painstakingly evident when they took the winning of the Iranian film A Separation as an indication of the demise of Israel. Showing how mono-manically abjectly deluded and obsessive and downright ridiculous they really are.

Don't mince or misinterpret my words however, I am well aware that a country that has a majority of Muslims in its populace can very well be expected to have that aspect of their beliefs reflected in their representative government. That however isn't the case with regard to this regime, instead of a relatively moderate Montazeri headed Islamic Republic (now a completely empty, meaningless and deceptive term) Iranian Muslims got an obscurantist and reactionary form of Islam that has failed for precisely that reason, because it failed to resonate with those it claims to represent. That sums up the failure and folly of the theocracy in a nutshell and also explains why the present up and coming Iranian generation is naturally more in touch with their past heritage rather than another dictatorship in a very long line of dictatorships, that like all others before it will in time relegate itself into irrelevancy.

Rapprochement with Iran shouldn't include exclusively dealing with this regime and treating it as if it was the legitimately appointed representative of the inhabitants of Iran. The west's propping up of the Shah and their mono-maniacal focus on his monarchy kept them blind to the peoples discontent right until the very end. Western politicians were also a little too surprised when a large insurrection sprung up in Libya last year, as they had seemingly come to terms with the Gaddafi dictatorship to the latent extent that he was – as he claimed in his megalomaniac outbursts – Libya.

Why recognize this provably and palpably illegitimate regime and help extend its well overdue lifespan?

In the meantime shame should be bestowed on those regime apologists who still refer to the Iran as the 'Islamic Republic' and actually try to convey that the present system is what Iranian's of all social, religious and ethnic stripes fought for in their revolution and imply and infer and that recognizing that, the peoples revolution, is recognizing this regime. This view is self-evidently untrue and preposterous when cross examined, and those who try and sell that line deserve nothing more than our complete and utter contempt.
Posted by Paul Iddon at 1:45 PM

Paul, you're now sounding as shrill as an MEK member. lol

Paul, that is absolutly my feeling; THEIR iranian nationalism is a fake; a true nationalist dont speak, dont pretend; they are only after some new source of legitimacy (that means cheap talk for them) because they have seen that iranian people dont accept their ridiculous and childish distinktion that islam is always good and west ist always bad; they cant operate outside this distinktion and thats why they have to go; it sad to see that in the meantime the iranian middle class is bleeding while they dont care

And rightly so Paul we Iranians do hold contempt towards those regime apologist automated trolls.

you should not be taken seriously

Why don't you put your money where your mouth is and leave the comfort of the West for a more comfortable life style among your ever loving mullah regime?
Go and experience the oppression caused by the mullah theocracy upon the Iranian people and talk the talk buddy.

More drivel and nonsense from Paul Iddon who would truly deserve to be shot.