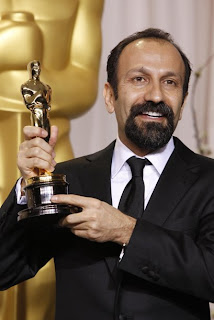 Iranian authorities today cancelled a ceremony in honor of Asghar Farhadi who won an Oscar for best foreign language film for "A Separation." There were no official explanations as to why the ceremony was canceled. Earlier this week, large number of Iranians greeted Farhadi upon his arrival at Tehran’s airport. The authorities might have expected an outpouring of public support for Farhadi and the stars of A Separation during or after the ceremony.

From their point of view iranian people should not be allowed to be happy; happy people disturb their - confused political - view that is based on hatred of the world

The country could be attacked by Israel any second, gimme a break.