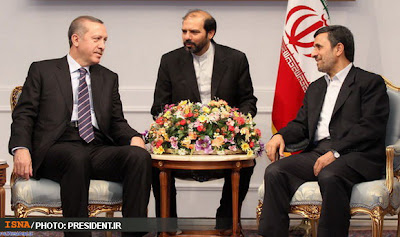 Analysts believe that Iran’s nuclear program and preparation for the upcoming nuclear talks between Iran and the six major powers, scheduled for Friday 13 April in Istanbul, must have been at the top of their agenda. Premier Erdogan held a lengthy meeting with President Obama on the sidelines of the Seoul nuclear safety conference prior to his departure for Tehran. It was not clear if he was carrying a message form the US president.

He comes to deliver a message and beg Iran to give up Syria. Which wont happen.

More angry sanctions against Iran on its way.