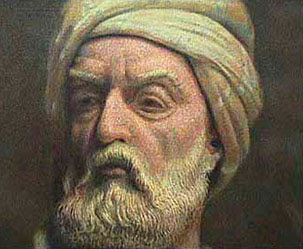 Iranian President Mahmoud Ahmadinejad in a controversial speech to a group of Iranian residents in Tajikistan last week praised Ferdowsi, arguably the greatest Persian poet of all time, known as saving the Persian language, but added that Ferdowsi also saved Islam.

“Ferdowsi saved the Faith of the Great Prophet (of Islam) and removed the unenlightened from carrying the burden of the Faith and put it squarely on the shoulders of the Iranian nation. And the nation has well fulfilled this (enormous) responsibility.” [Tabnak, 29 March].

Ahmadinejad’s assertion of Ferdowsi’s role in saving Islam is causing a wave of protests from senior Islamic clerics, such as Grand Ayatollah Makarem Shirazi, for belittling the role of the clergy in carrying the Faith and the teachings of the Great Prophet, to others, like the director of the Library of Majlis, accusing Ahmadinejad of blatant ultra-nationalism and racism for attributing saving Islam to an Iranian poet.

Hakim Abol-Ghasem Ferdowsi Tousi was born in 940 and passed away in 1020 in Khorasan. His Shahnameh (“The Book of Kings”) is considered the national epic and a Persian literary masterpiece.

No,Ferdowsi saved Iran and Iranian language and culture without a single sword being drawn.
If it was Islams way we would be speaking Arabic like in Egypt.But what the hell,didn't this moron say that Cyrus the Great was a basij.
These people not only trample on our own culture and history but also trample on their own traditions like for instance when in 2009 they killed people on Ashura.

You cannot underestimate Ferdowsi.He is one of the few greatest men in our history.
What Ferdowsi was Khomeini was the opposite.The destroyer of Iranian culture in the name of Islam.
So Ahmadinejad is talking from his backside because Ferdowsi cared for old Iranian culture not the forcefully imported culture from the desserts of Arabia by the sword.
And Anon 7:43 AM your right he did say that Cyrus was a basij or they held a ceremony and made a pretend Cyrus into a basij by putting a Palestinian scarf around his neck.
What ever the case this regime will try to hijack the good name of Ferdowsi and use and abuse it for their own dirty deeds,shameless people.

Back to Zoroastrianism said...