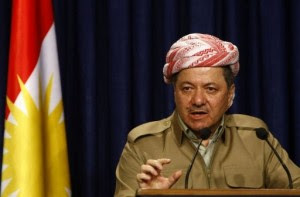 In a move that can potentially unravel the balance of power in the region, Kurdish leader Massud Barzani has hinted at a break with the Iraqi central government. Barzani said the partnership that built a national unity government was now “completely non-existent and has become meaningless.” The Kurdish leader made the remarks during the Norouz (New Year) massage to the Kurds from Erbil, the capital of the autonomous Iraqi Kurdistan.

“We are committed to our alliance with the Shiites but not with this group of people who have monopolized power and with their policies have even marginalized other Shiites,” Barzani said. “It is time to say enough is enough. The current status of affairs in unacceptable to us and I call on all Iraqi political leaders to urgently try to find a solution. Otherwise, we will return to our people and will decide on whatever course of action that our people deem appropriate.” [AFP, 21 March].

The latter reference was a poorly veiled threat to hold a referendum in Kurdistan on its future within or independent of the Iraqi state.

Barzani accused Iraqi premier Nuri al-Maliki of monopolizing power and building an army loyal to him only.

“There is an attempt to establish a one-million-strong army whose loyalty is only to a single person,” Barzani said.

Maliki has yet to appoint permanent ministers of defense and interior, more than two years after parliamentary elections.

Kurdish MPs hold nearly a fifth of the seats in parliament, and Barzani’s Kurdish Alliance bloc has five cabinet posts in the national unity government formed in November 2010.

The central government and Kurdish regional authorities have been locked in protracted disputes over oil contracts with foreign oil firms and the status of a swathe of disputed territory around the northern oil hub of Kirkuk.

The Kurds maybe looking for an opportunity to declare an independent state.
Considering that no country in the world would support them, they would probably trigger a civil war if they did succeed, not to mention sealing the fate of other Turkish minorities in the region aspiring for federal systems that give them more rights locally.

Nuri al-Maliki is a puppet of foreign powers and is as bad as Saddam with his fanatic Shiits supporters running around and killing young people for looking different.Barzani should take note because this could only lead to civil war.

Its good to give the kurds their country, may be they stop being such jerks and stooges of others and become loyal to themselves
Problem is they are 8 clans and they hate each other more than arabs and jews.

Problem is they are 8 clans and they hate each other more than arabs and jews.

And that's why the Kurds will never achieve independent statehood.

Its good to give the kurds their country...

As long as their country consist of Turkish and Iraqi territories. Not one square inch of Iranian land should be given to them.