Winds of Change in the Middle East 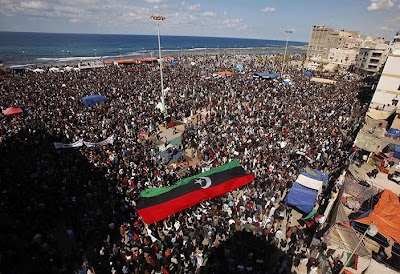 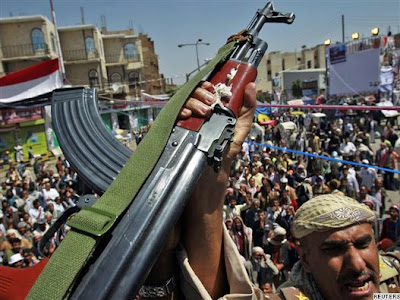 An army officer raises his rifle as he joins antigovernment protesters during a rally demanding the ouster of President Saleh in Sanaa on 21 March. Photo: Reuters 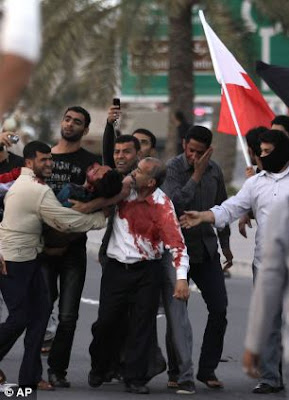 An anti-government protester is carried after being shot during a demonstration in Manama, Bahrain on Friday. The protests are aimed at defying emergency rule invoked by Bahrain's monarch. Photo: AP 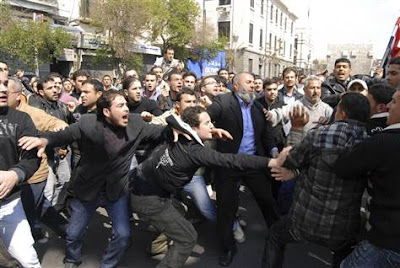 Anti- and pro-Assad protesters clash after Friday prayers in Damascus, Syria, on Friday. Thousands took to the streets in the most widespread civil unrest in current uprising, demanding reforms and mourning dozens of protesters who were killed during a violent, weeklong crackdown. Photo: Muzaffar Salman, AP
Posted by Nader Uskowi at 12:54 PM

i wish them all the best, and hope that the revolution will bring out the best in these people.

The comments we do not release are the ones involving personal attacks and foul language. Publishing comments does not mean we are in favor or against them, they are the commentator's views not ours.

You have also asked if we support racist comments made on the Arab freedom movements. What do you mean by such suggestion?