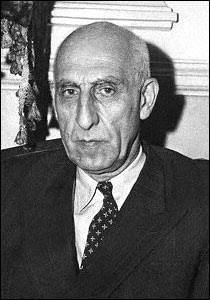 Sixty years ago today, Iran under the leadership of Mohammad Mossdeq nationalized the Anglo-Iranian Oil Company, renaming it the National Iranian Oil Company (NIOC). Mossadeq become premier and led the country until the British-American led coup d’état in 1953 that brought the deposed Shah back to power. And the British renamed their company the British Petroleum (BP).

That was one great move by Dr Mossadegh in the right direction.

The dissapointing point is that after 60 years Iran's economy is still heavily reliant on crude oil export to the tune of 80% of GDP. The economy remains largely state-owned and controlled, poorly taxed, still relatively highly subsidized anrd reliant om cash handouts to the tune of $2.3 Billion monthly.

Never seen that picture of Mossadeq, thanks for the post!

The dissapointing point is that after 60 years Iran's economy is still heavily reliant on crude oil export to the tune of 80% of GDP.

You should thanks the "green movement" leaders for this. Iran was left a bazaar economy for the Akhbar Shahs to profit. Things are changing under Ahmedijado El Magnifico. In another 10 years Iran will be leaps ahead in new technology then many western countries. You Iranians should think about changing your constitution to allow Ahmedijado stay a few more terms.