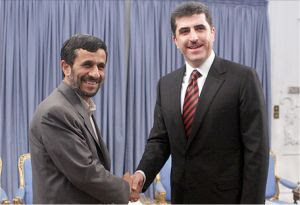 When Iraq’s President Jalal Talabani visited Tehran on Saturday to participate in Norouz celebrations, the man standing next to him was none other than Nechirvan Barzani, the former Kurdish premier, the nephew of Massoud Barzani and the deputy leader of Kurdistan Democratic Part (KDP). His presence alongside Talabani in meetings with Iran’s President Mahmoud Ahmadinejad and other Iranian officials indicated a united front of Kurdish ruling parties to seek Tehran’s help to quell the country’s growing opposition movement led by Gorran.

The Kurdish opposition includes two Islamic parties ideologically close to Iran, Komal and Yakgrtu. The Iranian government, however, maintains a close relationship with Talabani and the Kurdish ruling families and is weary of Gorran (“Change”) Movement and its popularity in all Kurdish regions and the neighboring provinces. That has put the Iranian government at odds with the two Islamic parties, so much so that the Komal and Yakgrtu parties refused Iran’s invitation to attend the same Norouz ceremonies. Barzani and Talabani were seeking Iran’s intervention with and pressure on the two Islamic parties to distance themselves from the opposition. But Komal and Yakgrtu’s refusal to attend the gathering in Tehran signaled the difficulties facing the ruling parties in Kurdistan to defeat or limit the influence of the movement for change in their region.